Denim was very popular in the 90's. I was a proud owner of a denim dress back then. 90's still has been popular again for some time now. And when I spotted this cute denim skirt at C & A I wanted to have it like a little kid. 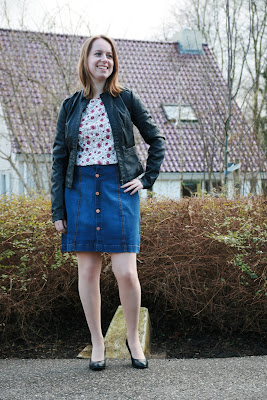 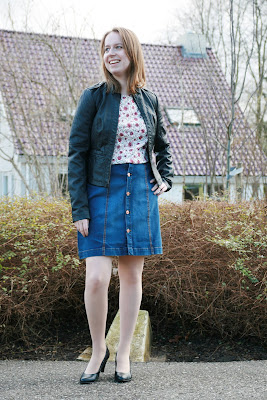 The skirt has buttons on the front. I also really like that it's not too short. It was only € 14,90 and after trying it on, I was sold. 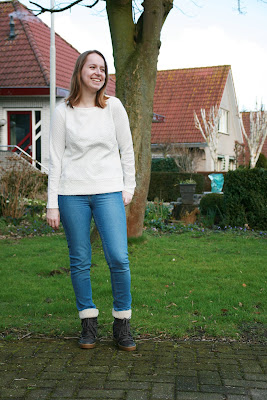 I bought this white sweater at C & A as well. The price was just like the skirt, € 14,90. A bargain right? It's a little bit see through so I do need to wear a top underneath. Or, if I want a promotion, I should wear it without a top. 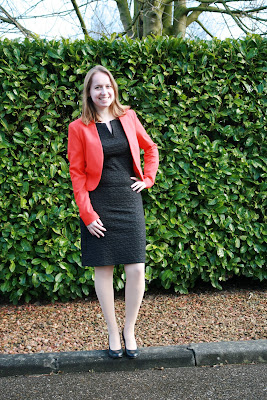 I saw this amazing red blazer at Steps in Almere a week ago, but it wasn't available any more in my size. But I loved the color and I wanted to buy it so badly. I found the blazer in my size at an other Steps store. I love sale but sale at Steps is even more amazing. I really love the clothes and especially the blazers and the dresses from Steps. Unfortunately it's not that cheap so I usually don't shop there. But when the sale starts I'm game. Especially because they're sometimes really good at it. This red blazer was originally € 79,95. Then it was priced of for € 63,95, after that it was € 39,95. And I paid € 35,- for the blazer. 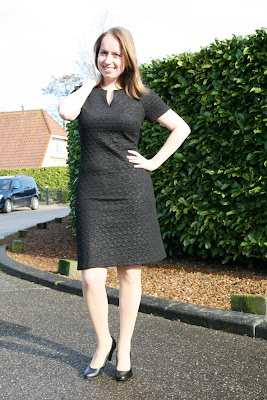 I spotted this dress as well. A simple but cute dress. Combine it with a colorful blazer and it looks smashing. But I like it without a colorful blazer as well because of the fabric and the playful cut at the top. This dress was on sale as well. It was originally € 69,95. Then priced of for € 55,25 (random price btw) and I bought it for € 25,-. So I bought a lot, but all for great prices. Kinda like I usually do!
Author Unknown op 10:28 AM