I'm slightly embarrassed at how much I bought. It's a lot, but when you think about, most prices weren't that high. I did spend a lot of money, but I also bought a lot. If you follow me on Instagram, you perhaps already spotted the picture with the bags. I gotta confess, whenever I saw women with so many Primark bags I wondered if I ever would buy a lot at Primark. The last two times were also a bust, so I didn't have high hopes when I went to Primark today. And guess what? I bought amazing stuff at Primark. 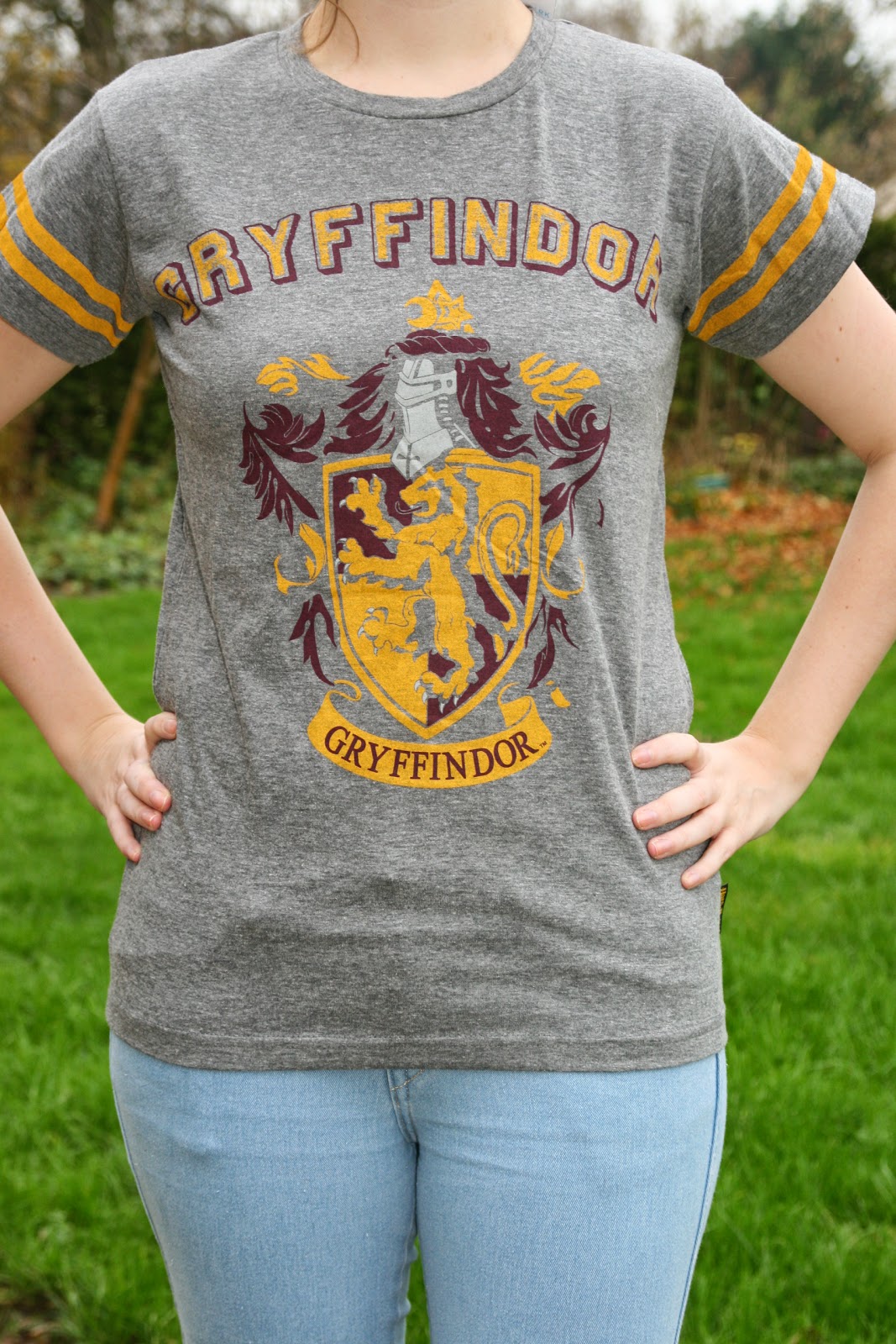 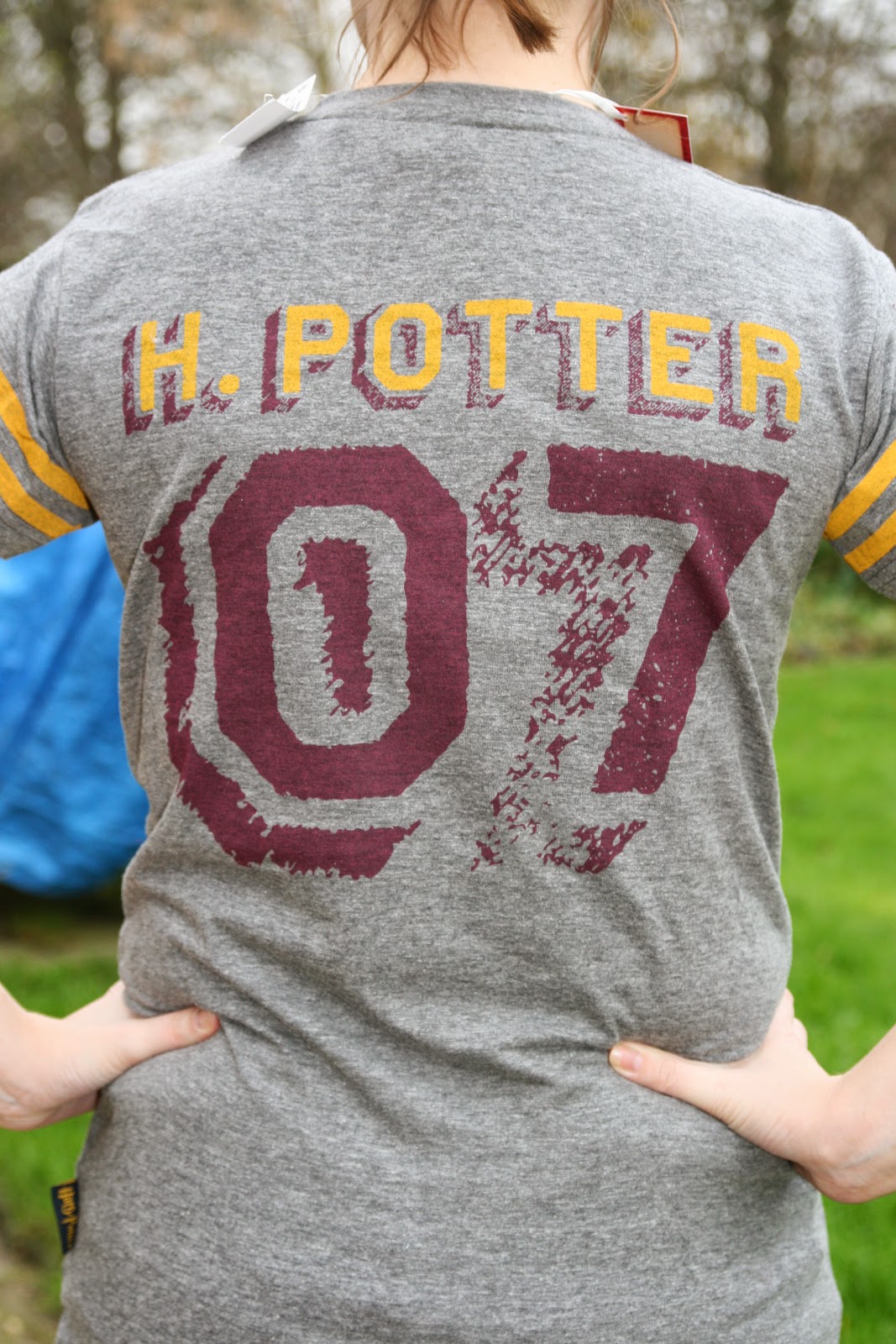 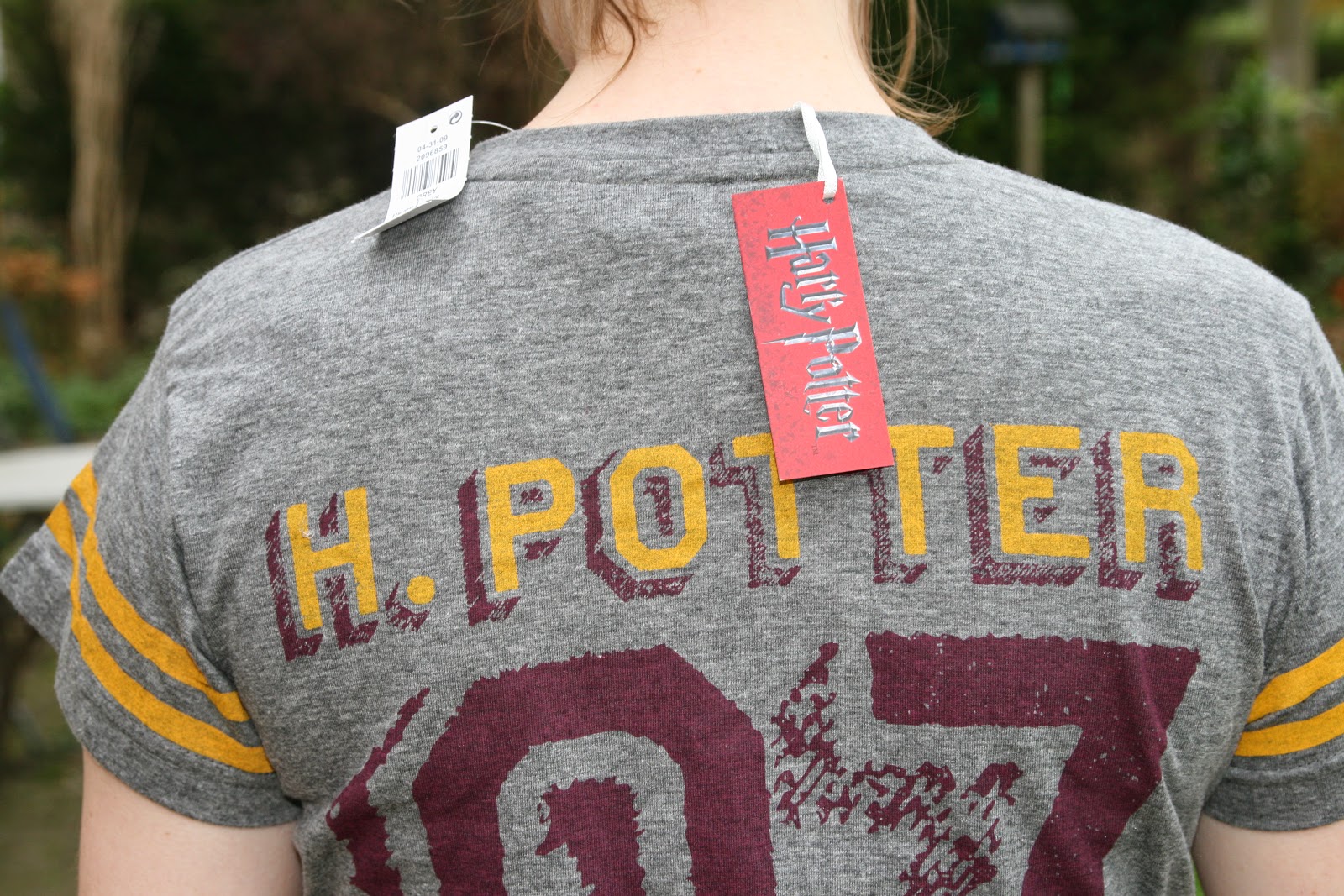 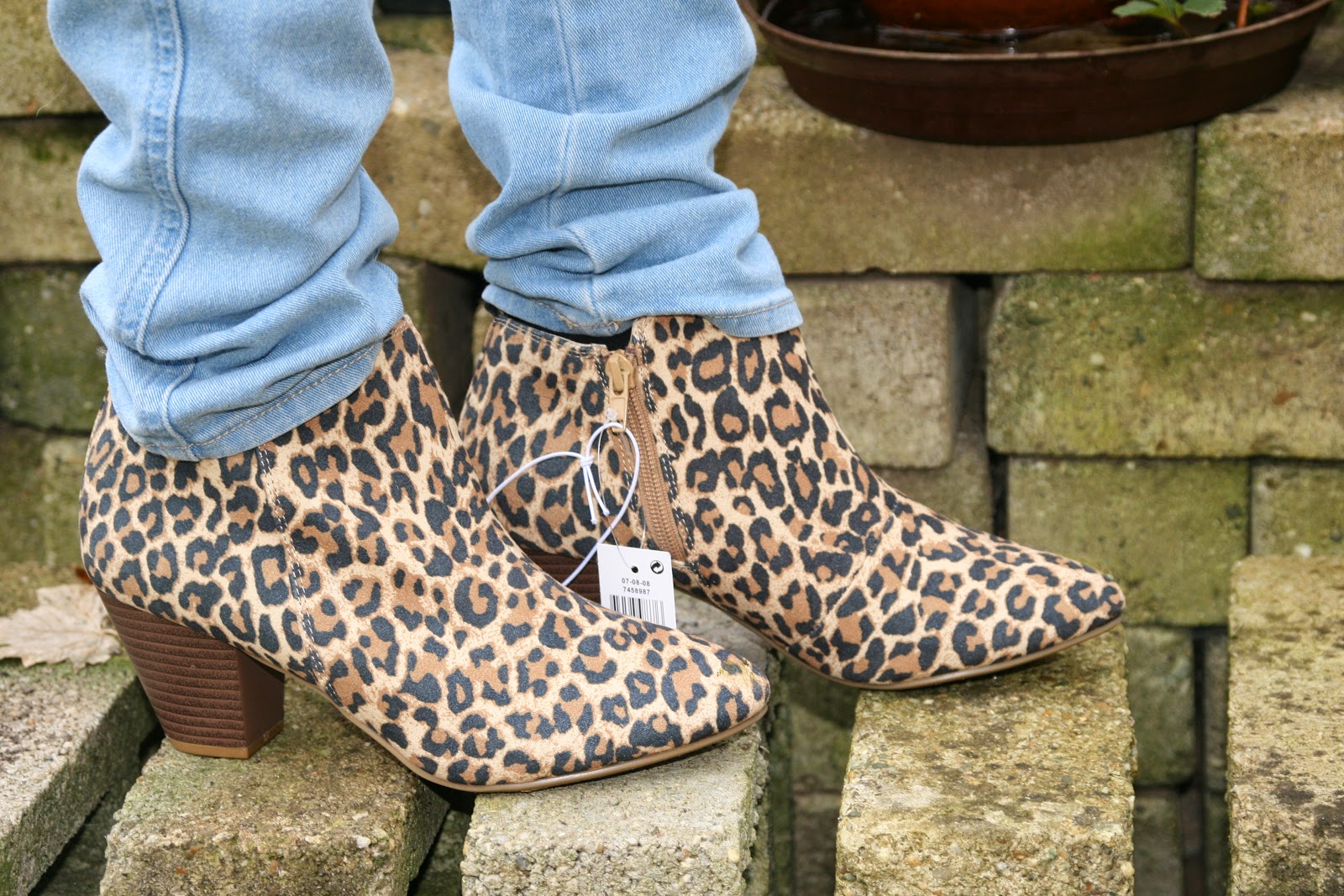 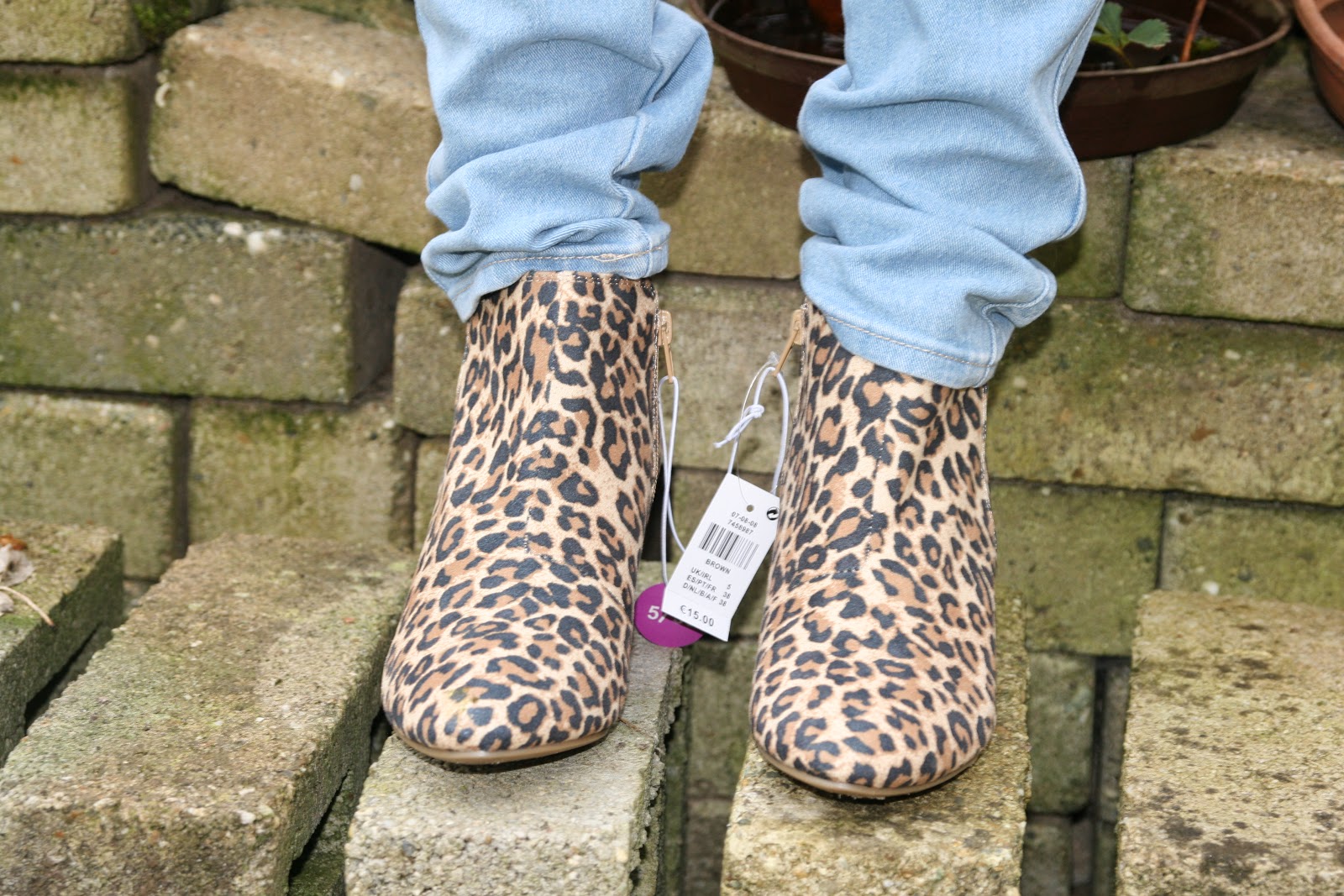 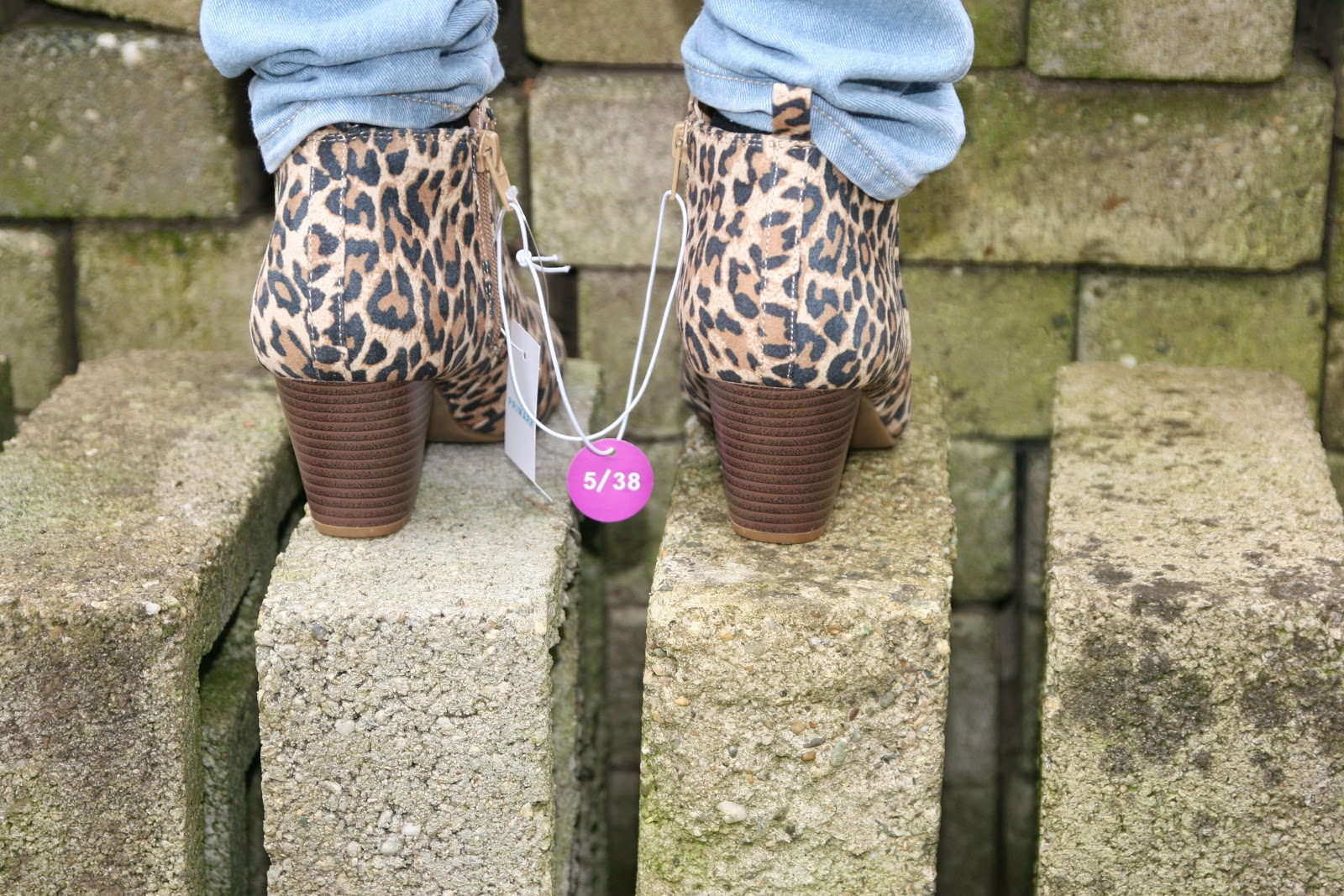 Leopard ankle boots! After two leopard blouses and leopard sneakers I now have leopard ankle boots. Yes, I'm currently obsessed with leopard. Plus these boots have wooden heels and I'm a sucker for those as well. These boots were € 15,- and they will be the eye catcher of any outfit. That's why I immediately thought that these boots would be amazing. I was again afraid that they would be slightly tacky but if the rest of the outfit is basic, then it won't. My mom payed for these boots, so sweet! 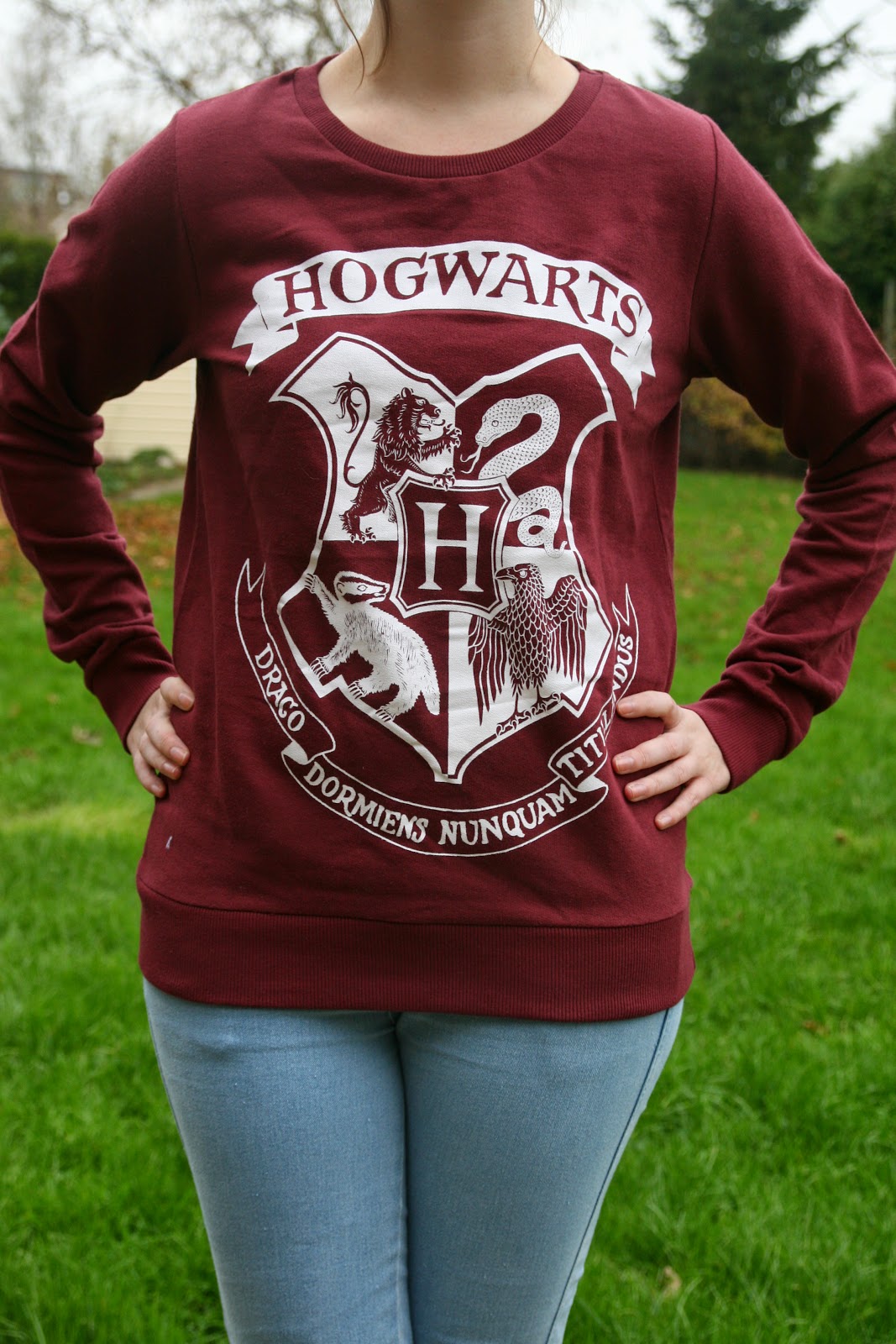 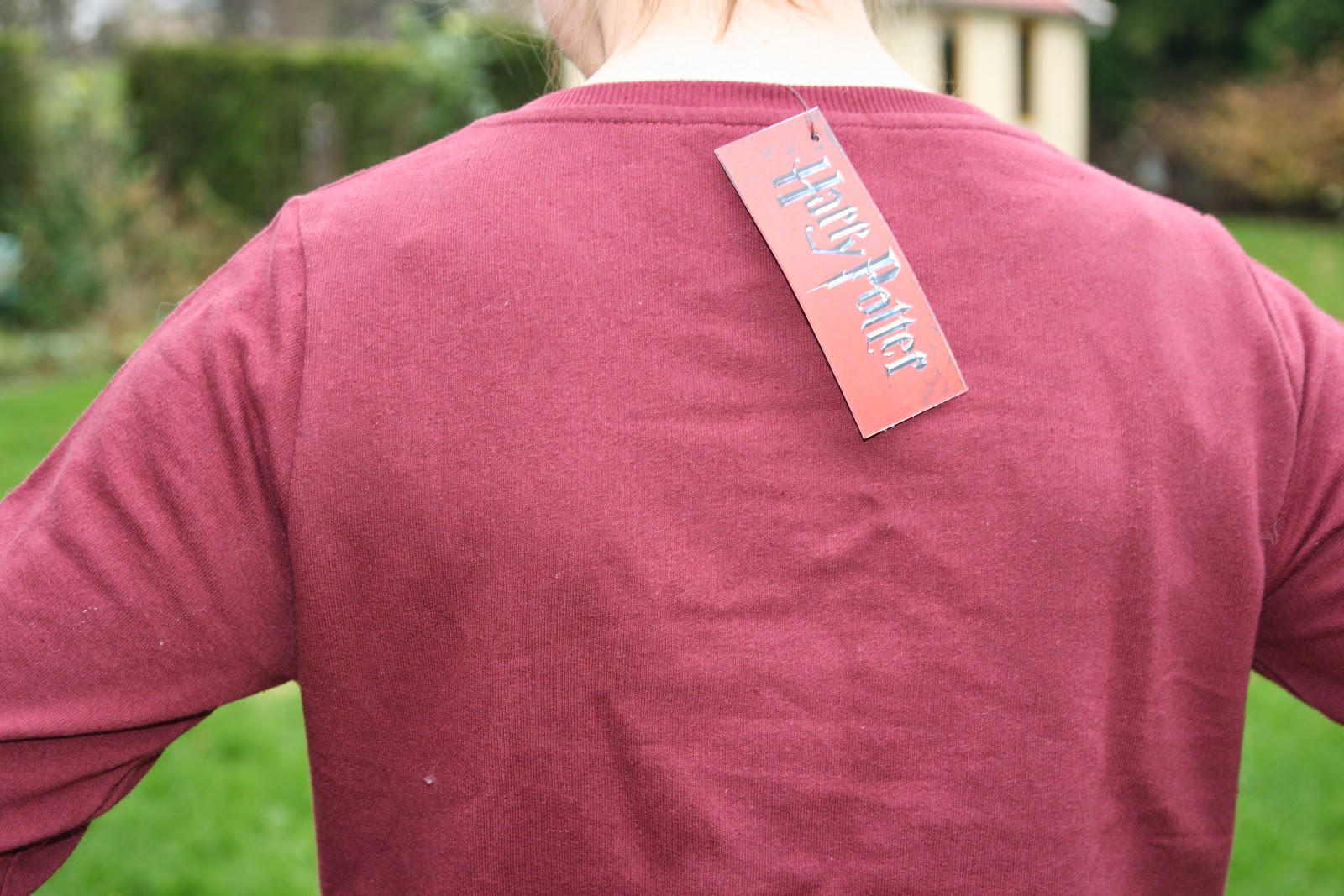 I also bought this Harry Potter sweater. It was € 12,-. At first I just wanted to buy the T-shirt, but I really liked the sweater as well. It looks great on light jeans. And I was searching for something Harry Potter related at Primark for so long, I felt I had to buy this sweater as well because otherwise I might regret it. 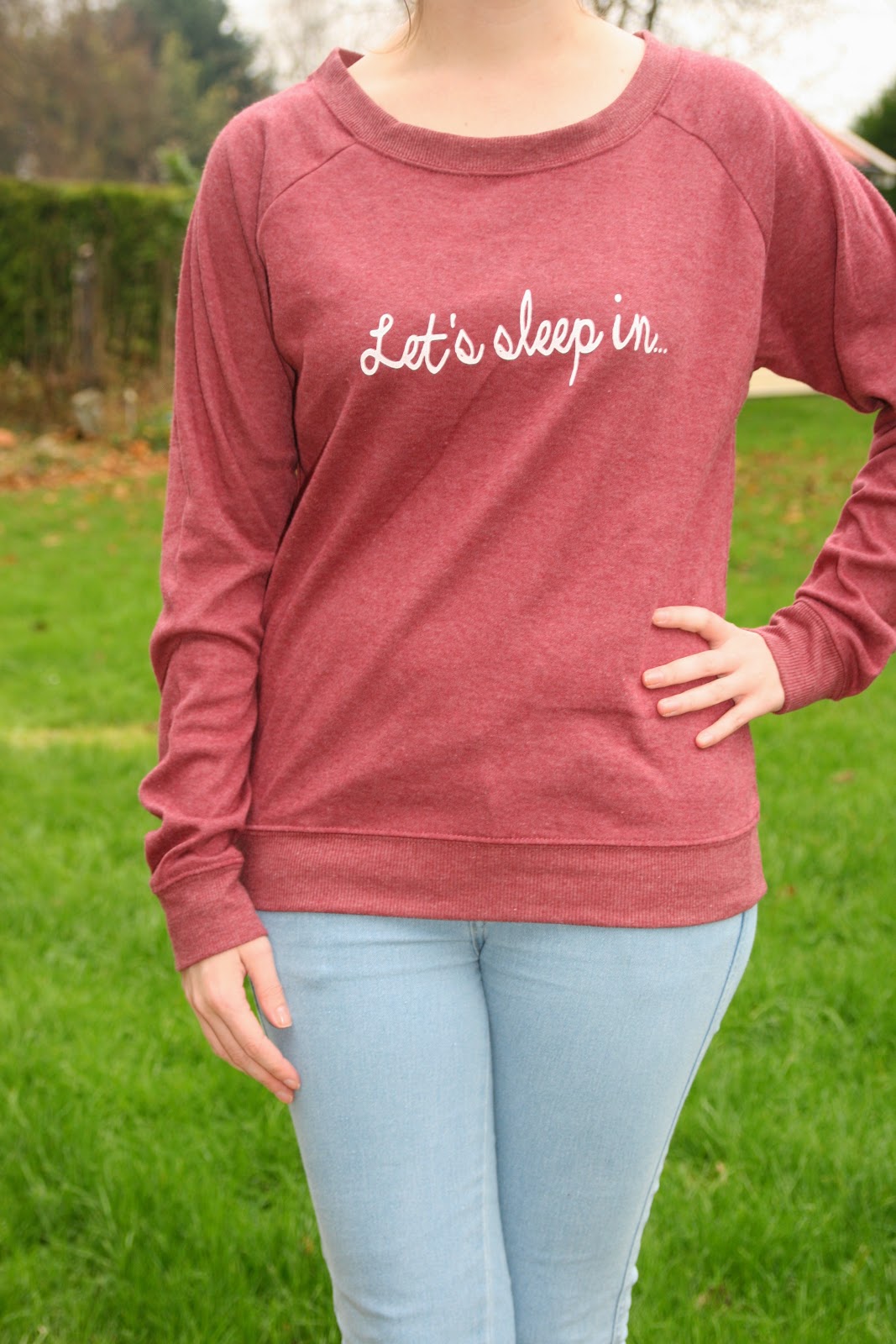 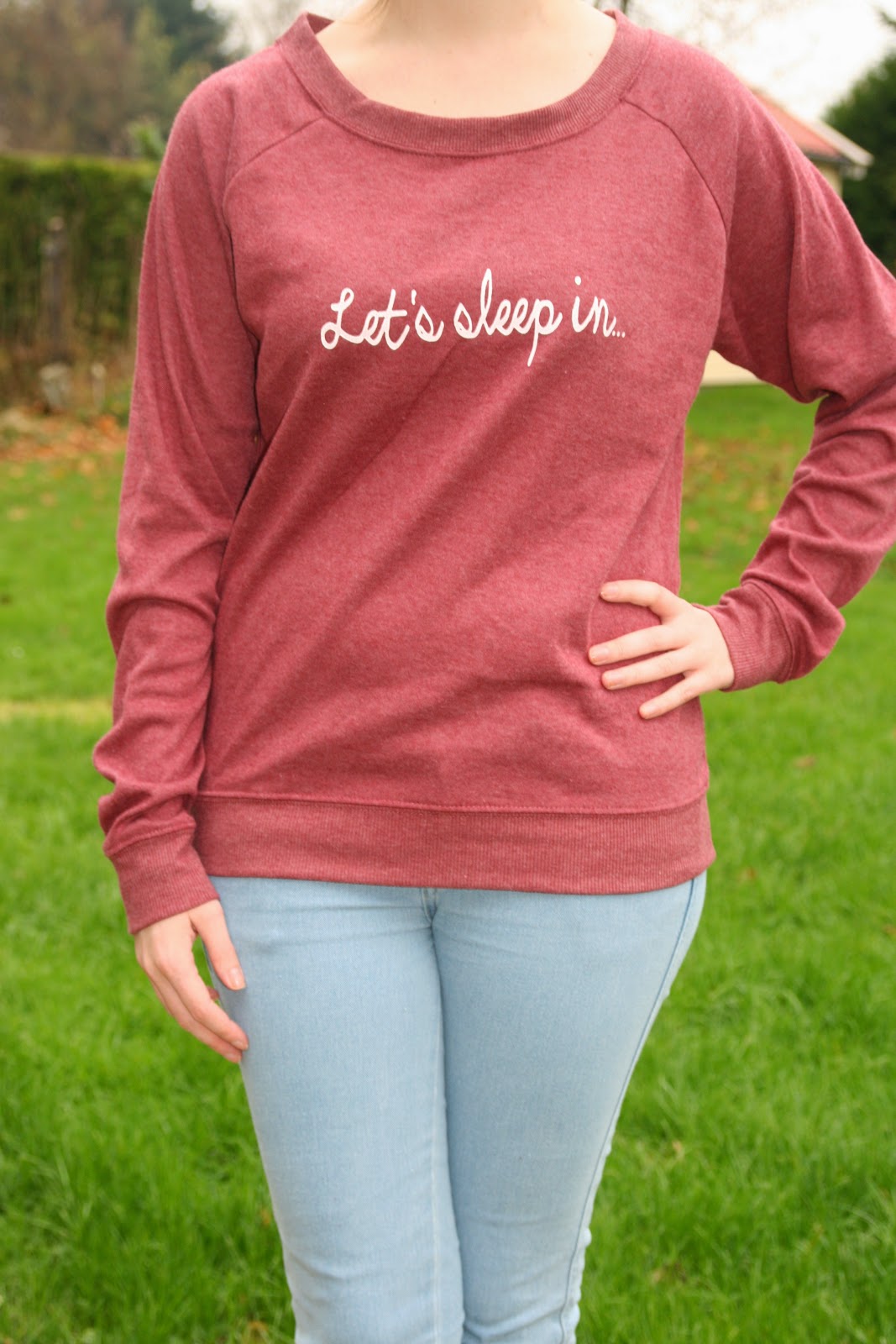 I was searching for a shirt to sleep in. I have a lot of pyama pants, but almost no pyama tops. I somehow end up buying pants and never see cute tops. So I needed some new ones. This one was only € 3,- and I love the text on the sweater. A great advice, don't you think? 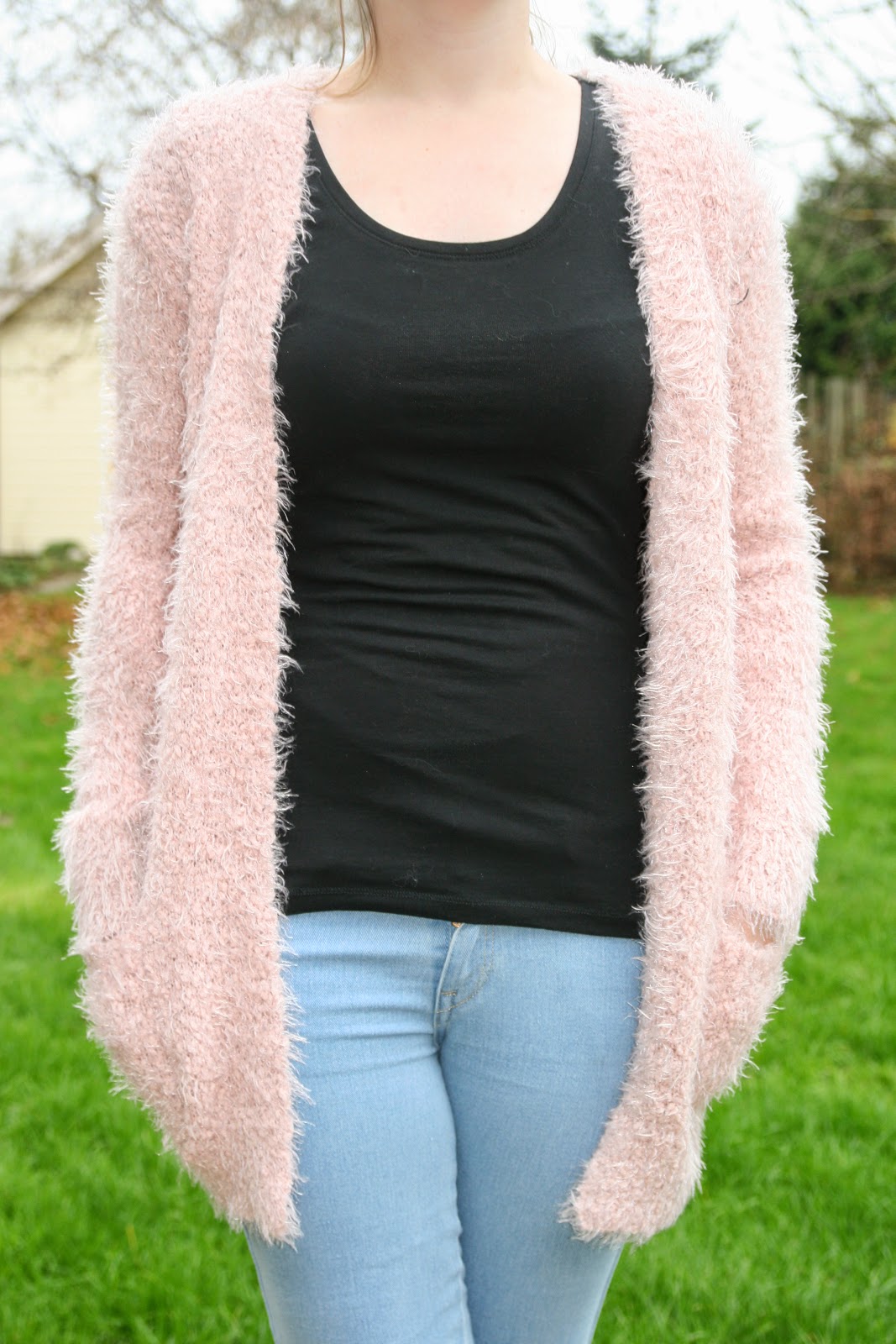 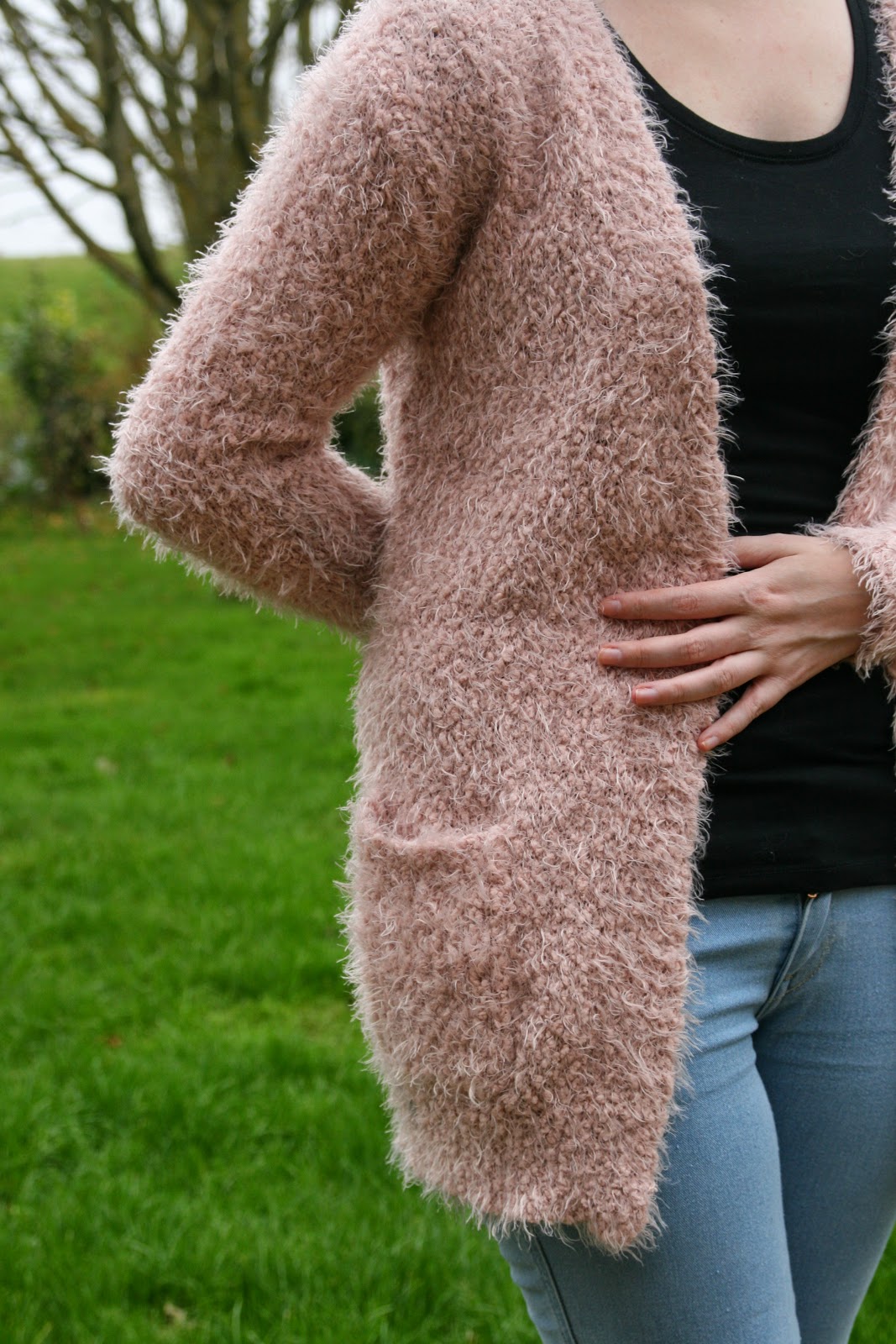 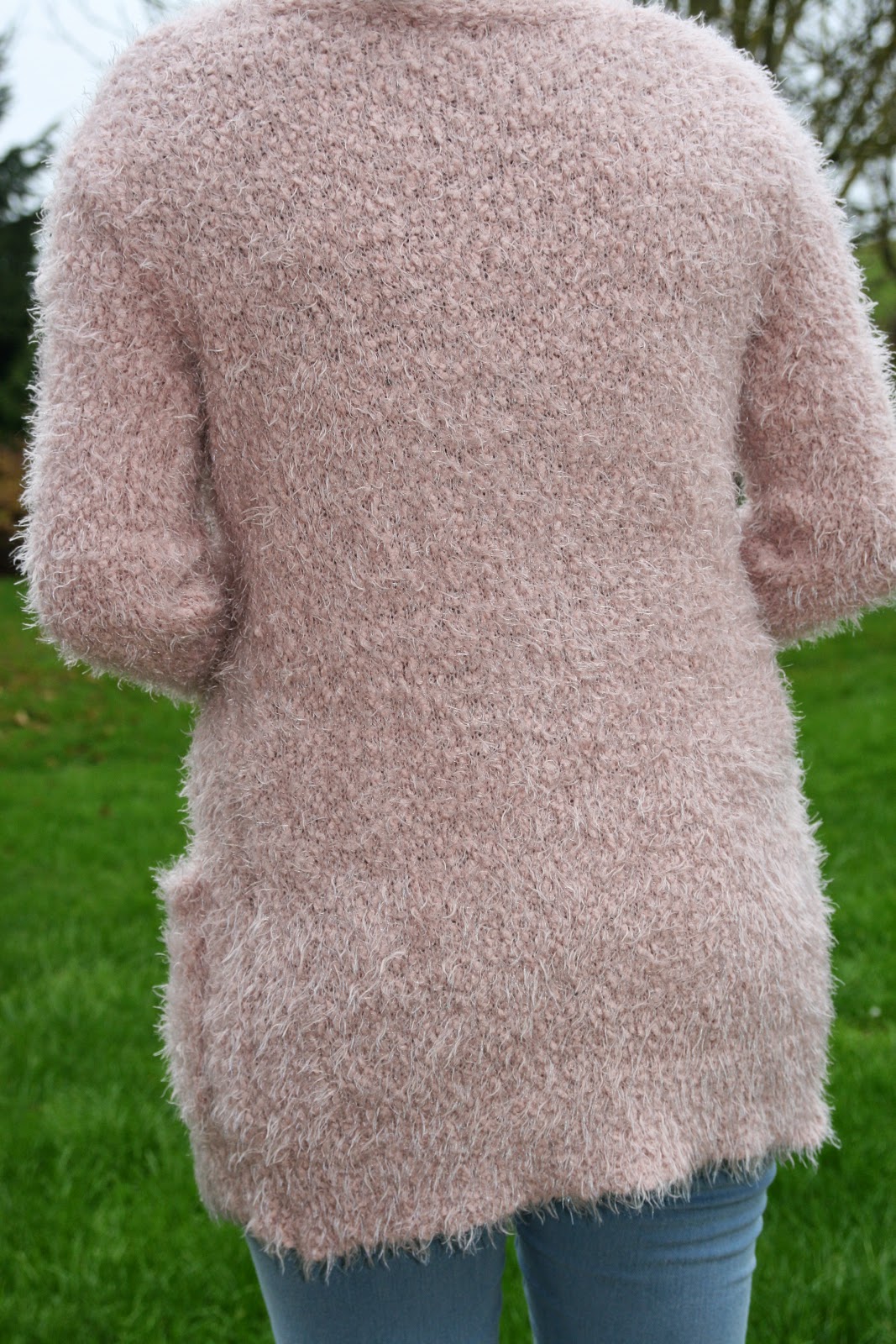 Fluffy, fluffy, fluffy! Can I just say again I love the fluffy trend? There were a lot of fluffy vests at Primark. I tried one several but this one was my favorite. It's warm and so soft. This vest wasn't on sale but it was still very cheap. It was € 15,-. 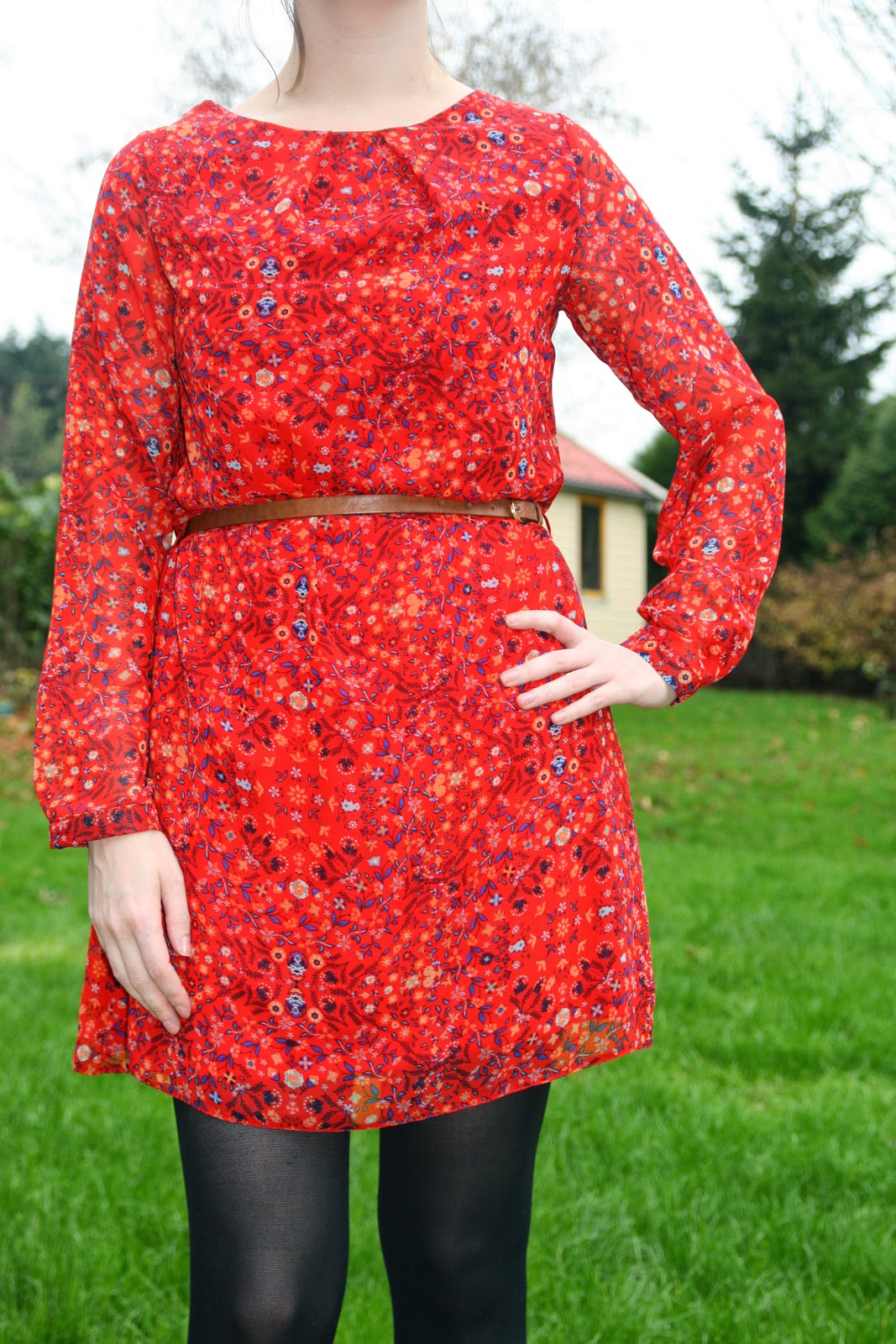 I tried this super cute dress on. I had seen it before and did try it on then as well. I think I felt it was too short and it was € 16,- so I didn't feel I needed another dress. Even though € 16,- is already super cheap. But I do have some dresses now. However I'm a sucker for bargains. This dress was priced of and it turned out it was only € 5,-. Too good to pass. After trying these things on, I went to the cash register. I was talking to the cashier and she mentioned there were clothes that were only € 1,-. I didn't see them so I went back. 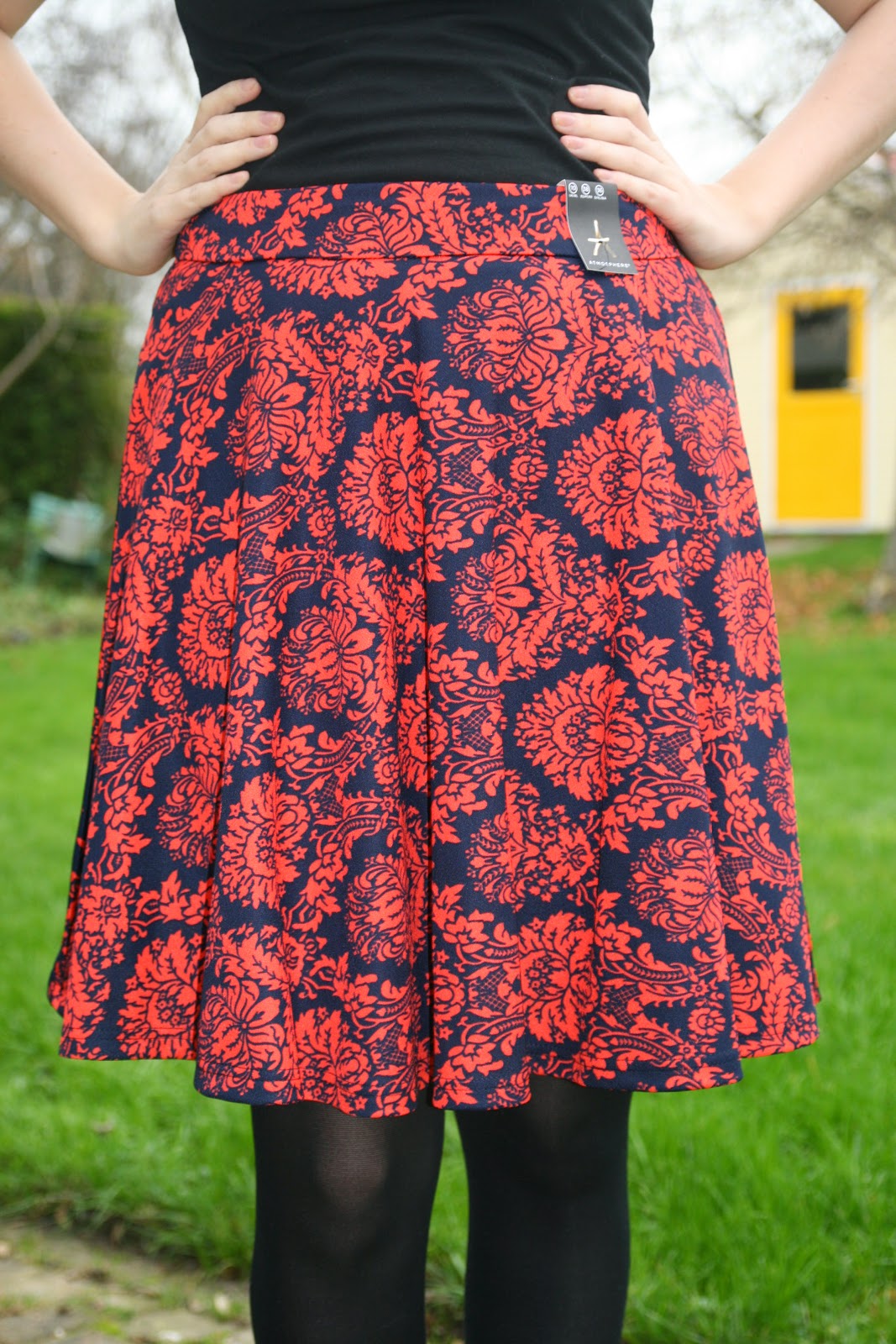 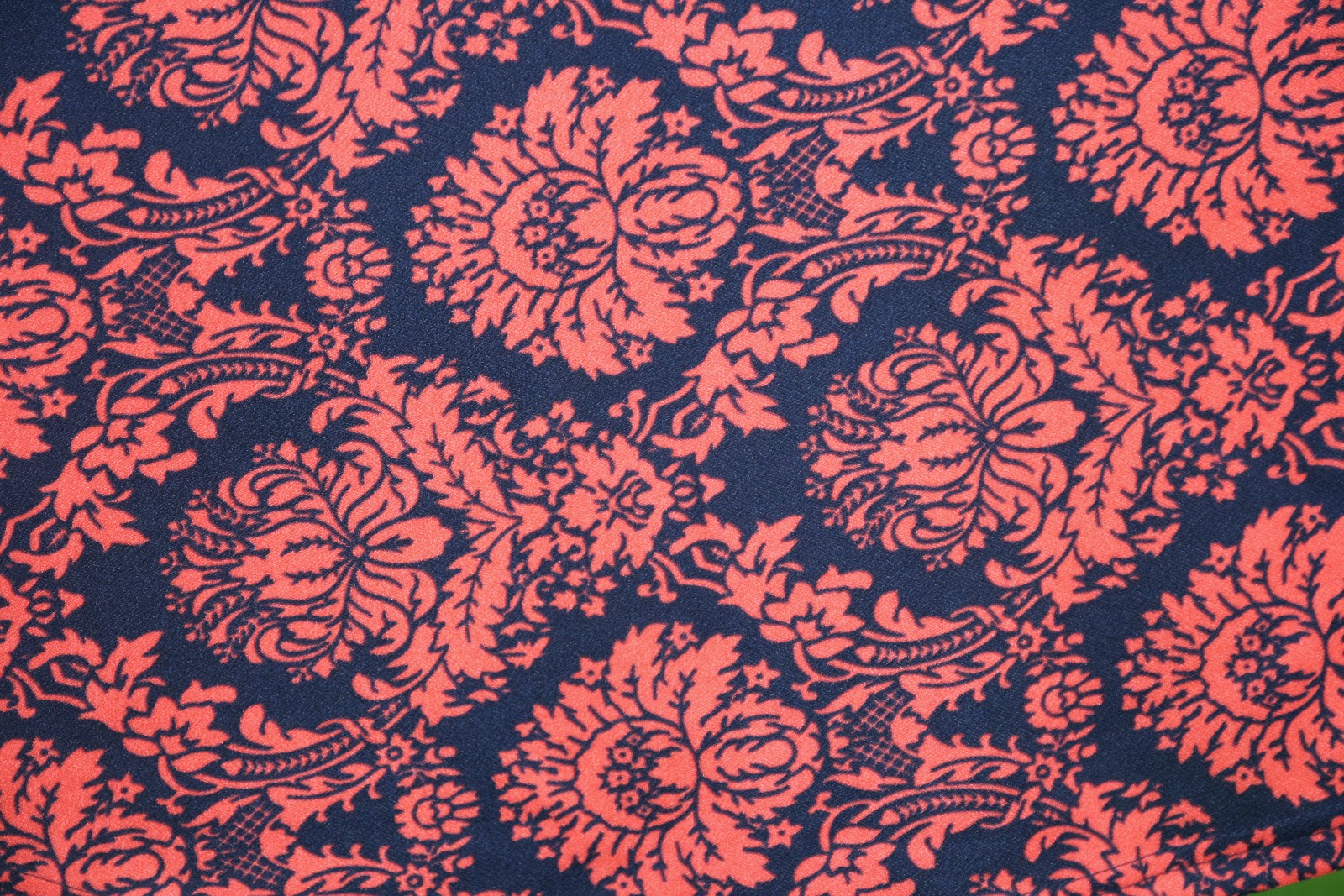 So that was round 1 and now round 2. I did find the items which were only € 1,- but I didn't like them. I did find some other things, one of them was this skirt. It's a bit longer than my other skirts, but I like it. I also love the print and the colors. It's very flowy as well. The skirt was only € 3,-. 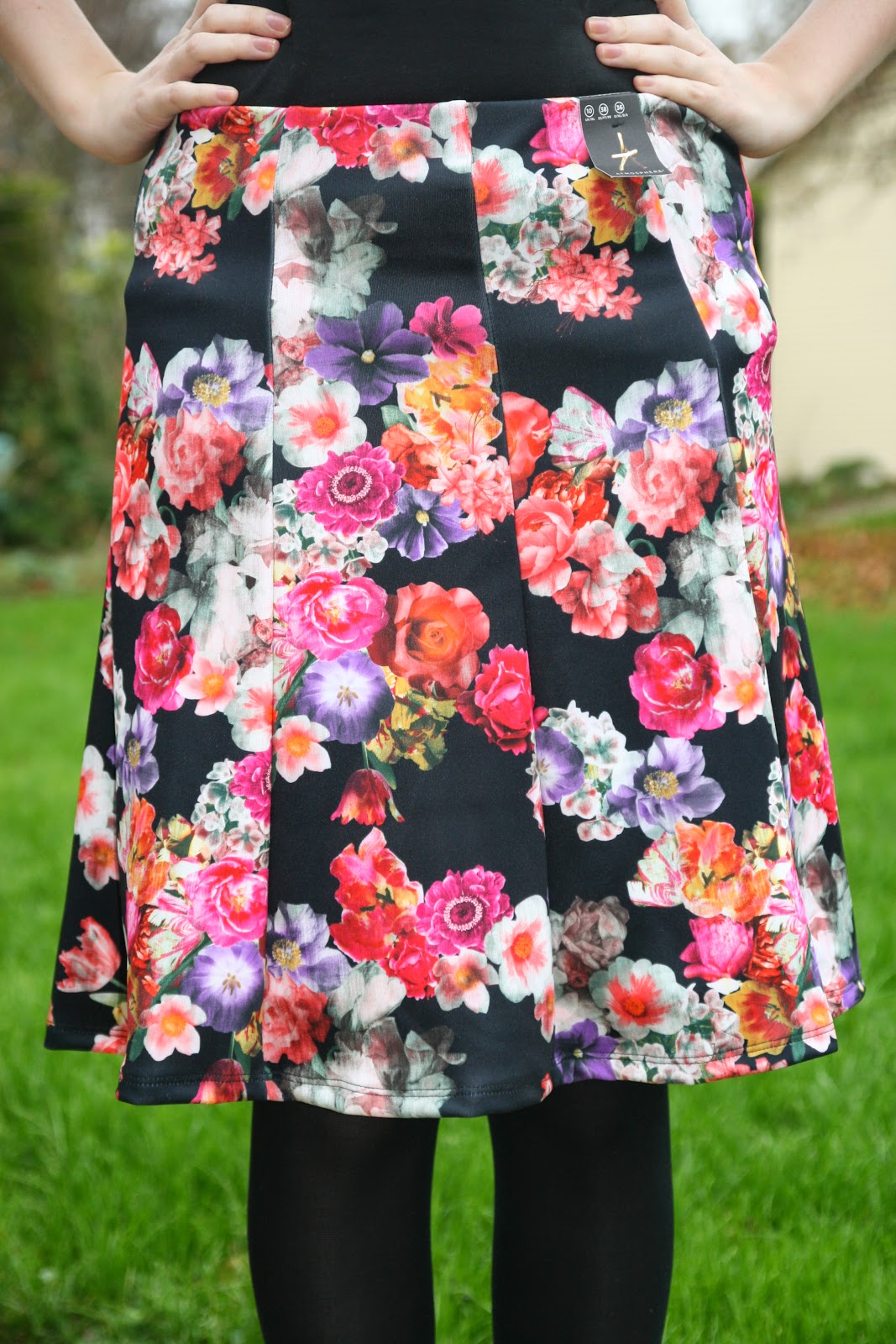 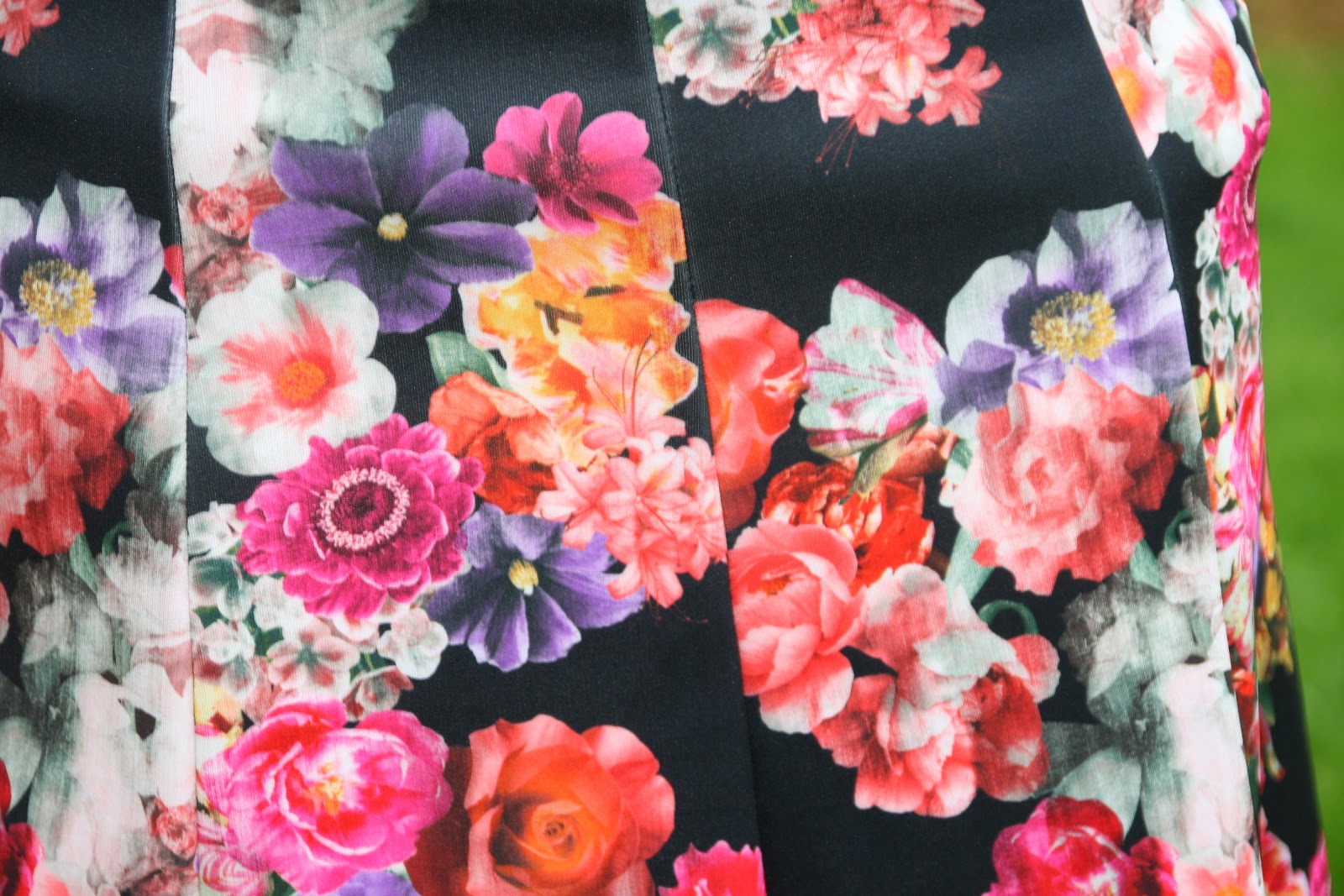 This skirt was also on sale. It was only € 3,-. I can definitely say my collection of skirts and dresses has grown a lot since having my blog. 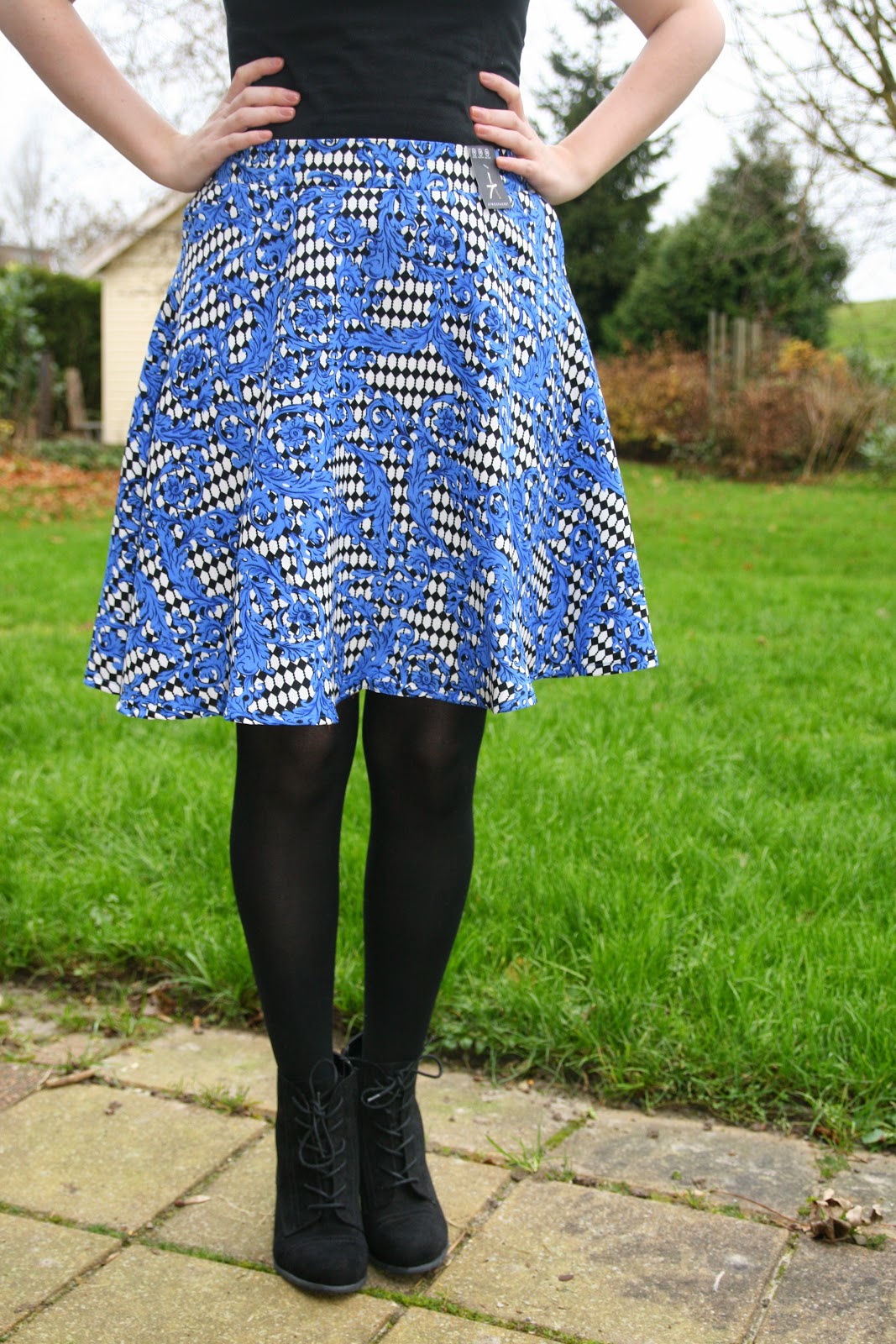 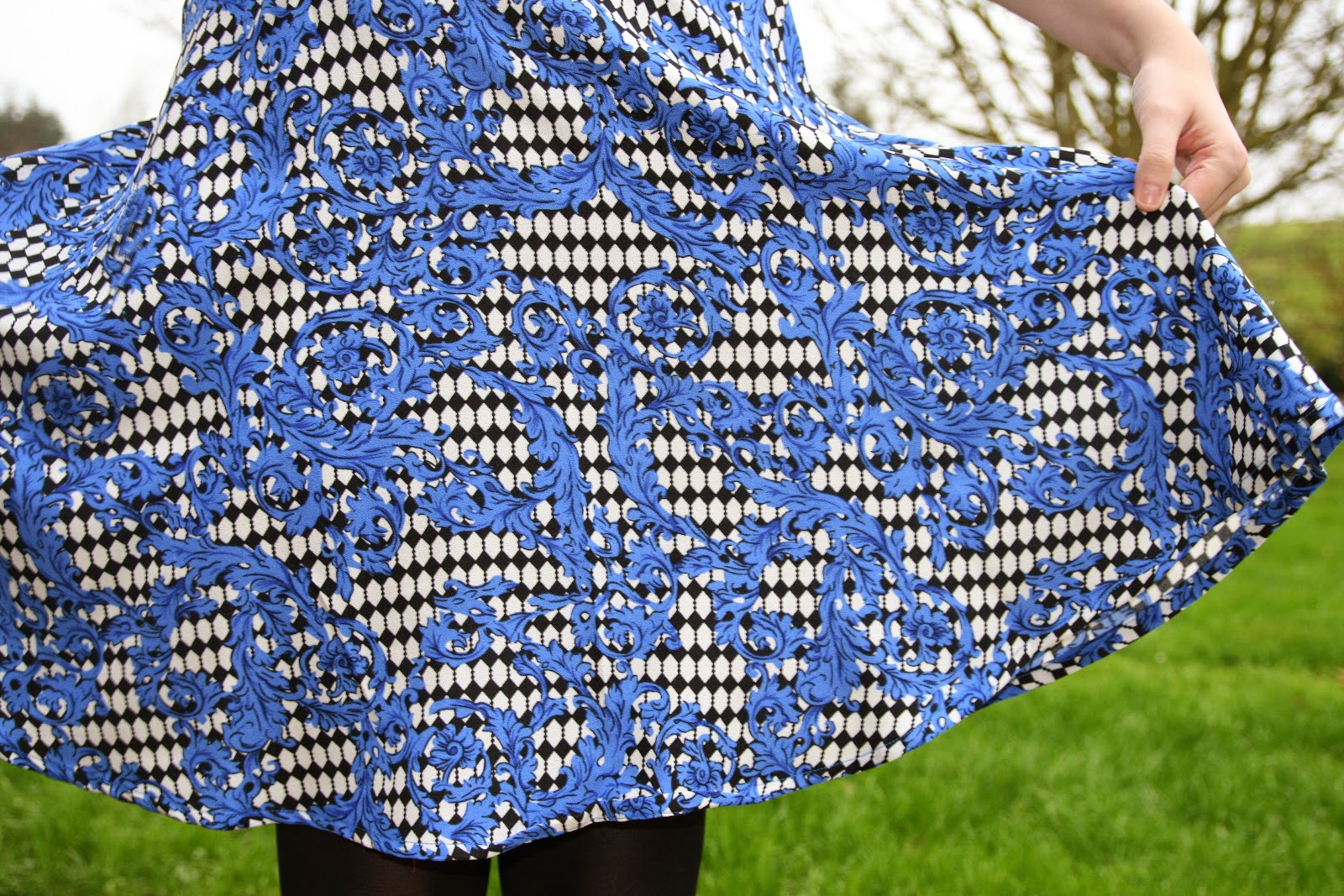 This skirt was on sale as well and was € 5,-. I actually thought it was € 3,- as well so when I saw the amount I had to pay I was confused. But I later checked the receipt and saw the price. Not that those € 2,- matters but I don't want to pay extra when I don't have to. 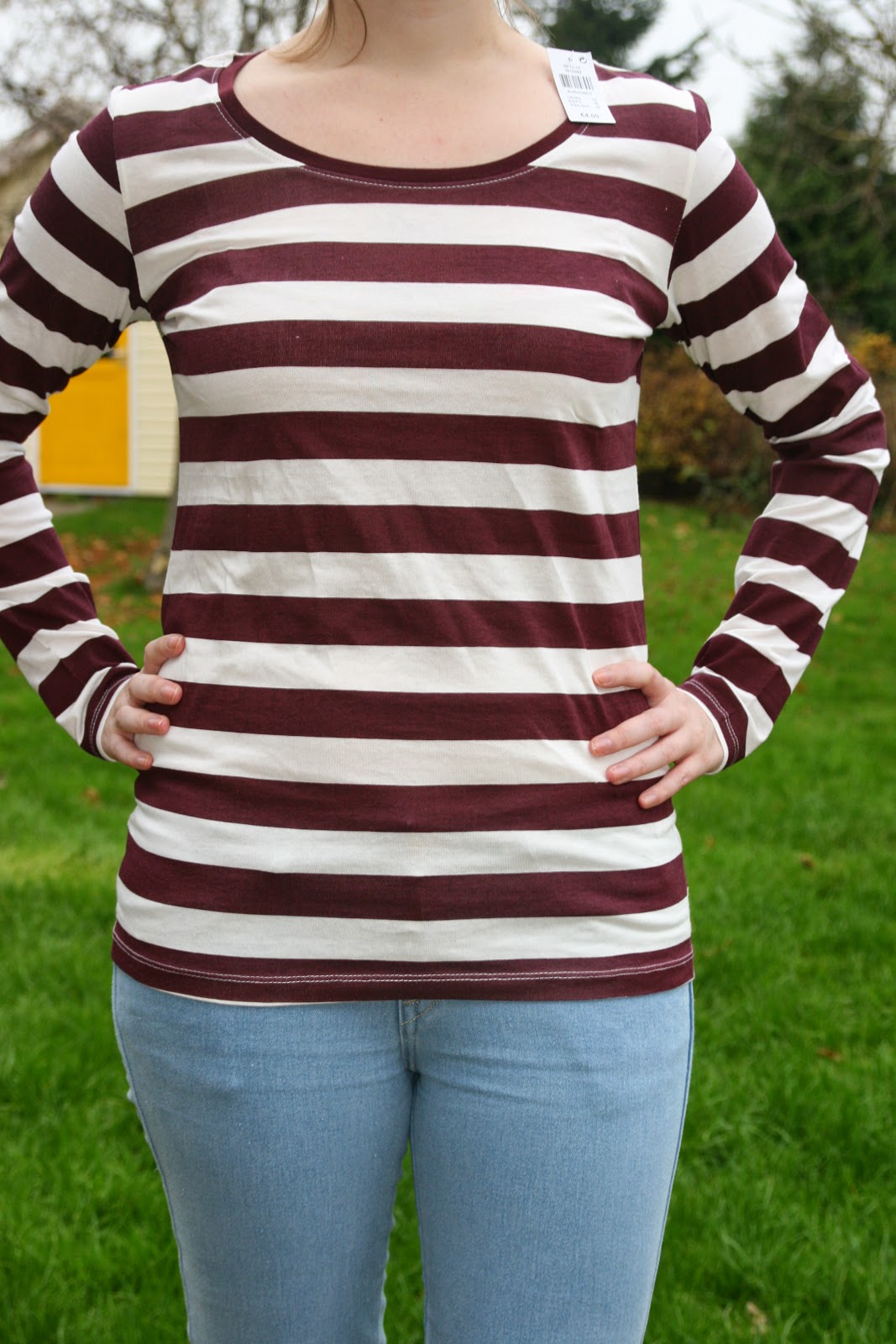 I'm gonna use this basic top for sleeping as well. It was only € 4,-. You can definitely use this as a regular top though. It's not super warm because the fabric is quite thin. But it's only € 4,-! Primark has a lot of these basic tops. 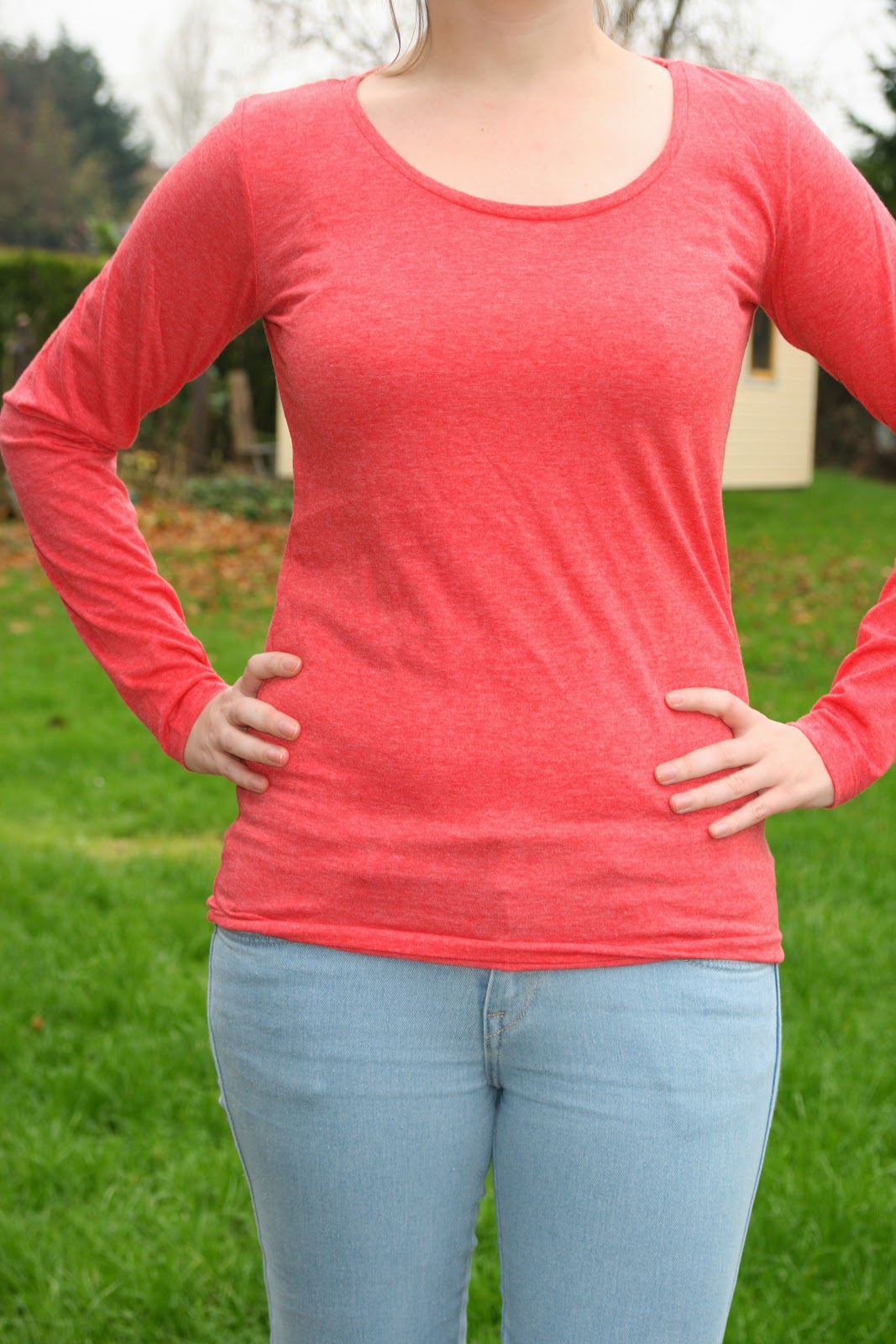 These basic tops can definitely be wardrobe staple items. Even though I will use this one as well for sleeping. The price of this top was € 4,- as well. These were all the items I bought at Primark. I didn't go for a third round, though I wouldn't be surprised if I found more items. Just kidding, I think I pretty much saw every woman clothing item. 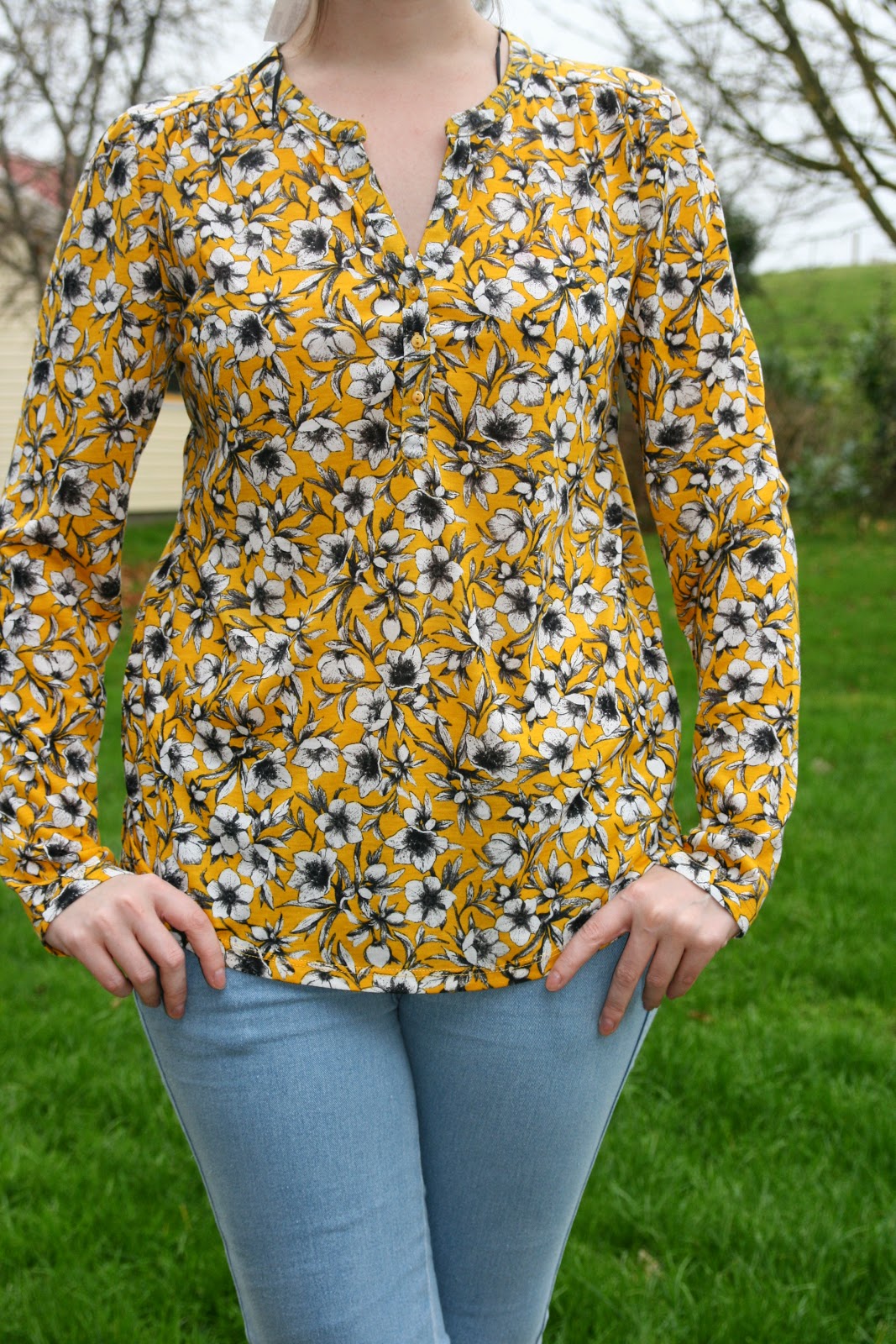 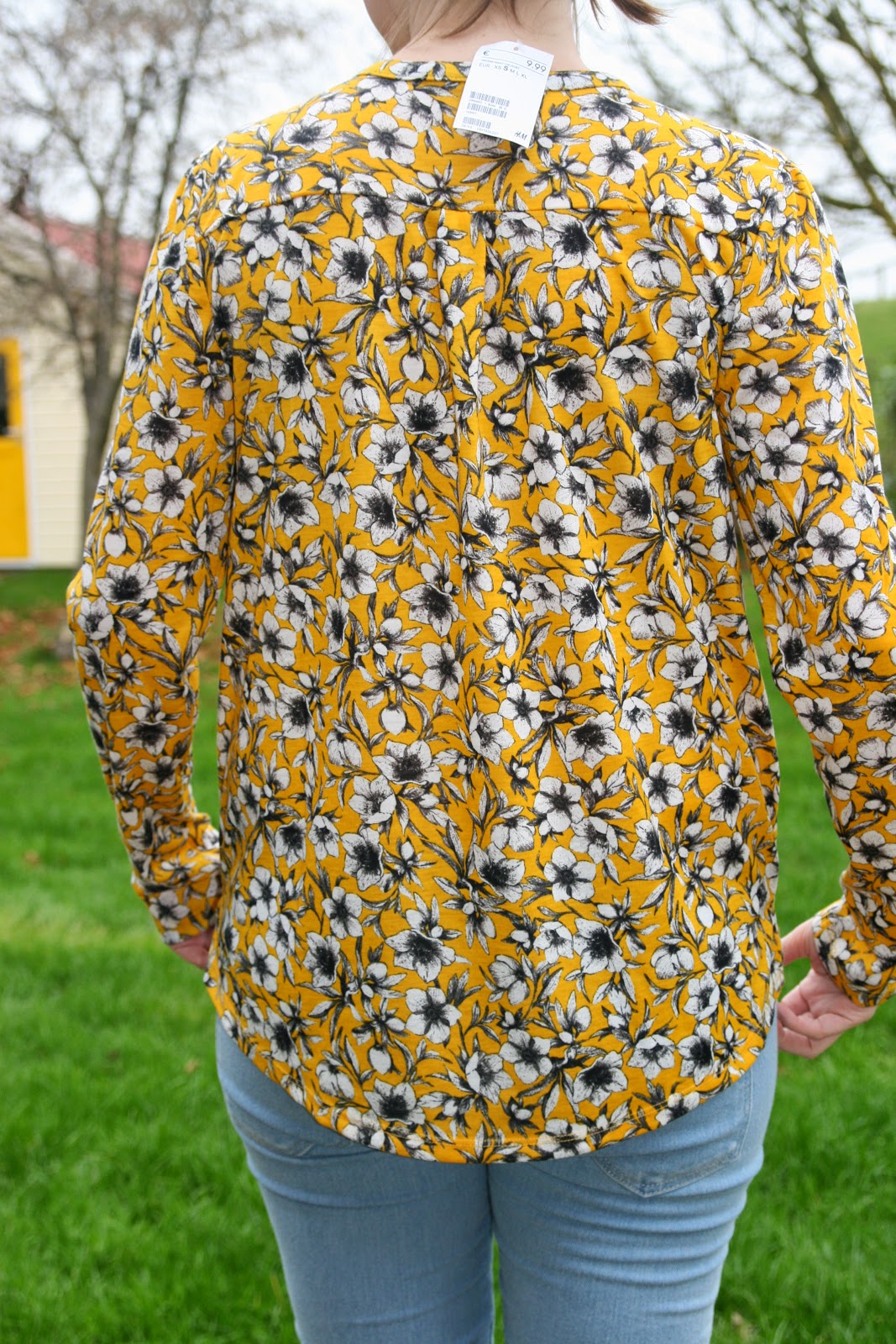 Up next was H & M. I didn't want spend too much money, because I already spend so much at Primark. I didn't really love the collection either at H & M. And I was dissappointed at the lack of sale. Usually there are leftovers from other sales. But there were only holiday deals, not a lot either. I did find this cute yellow blouse. I don't have a lot of yellow in my wardrobe because I usually think it's not my color. But this yellow was the right color, especially combined with the black and white flowers. The price of the blouse was € 9,99. 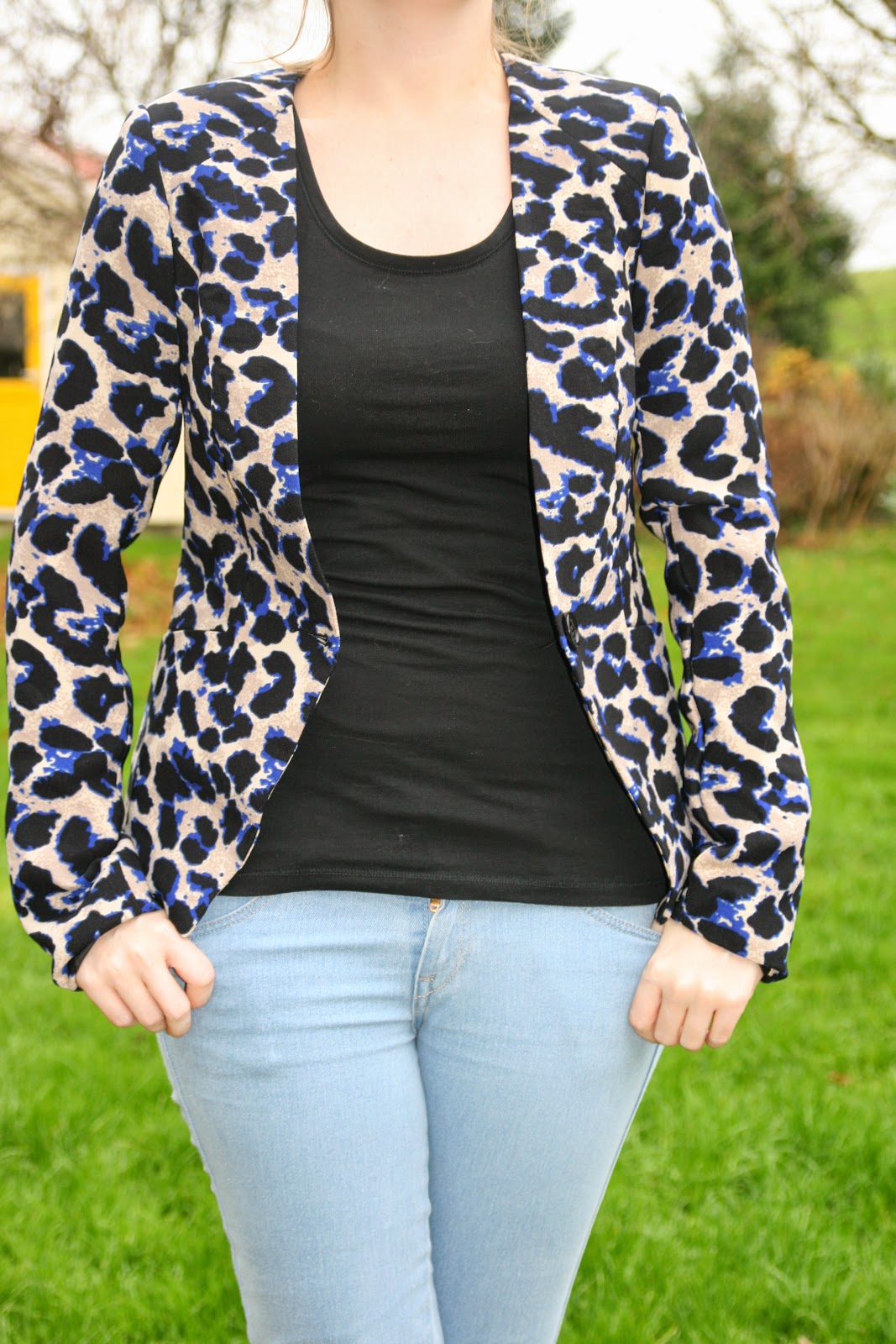 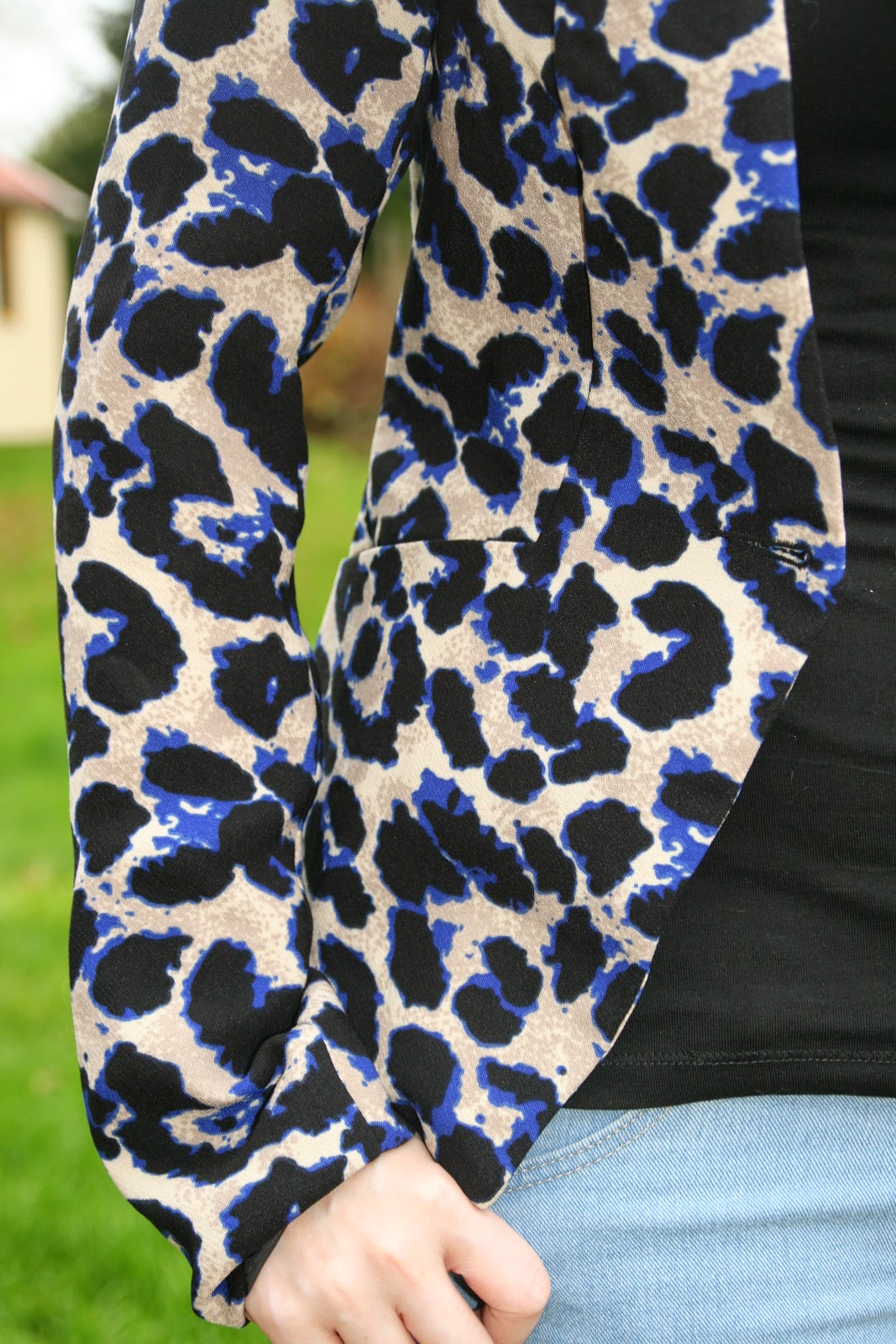 Last but not least, the leopard blazer! Because I didn't own that one. Kidding again, because when I buy something I always like it (and mostly love it). So I'm not buying clothes because I don't own them, but because I want to have them. Whether that's healthy or not... I actually spotted a nice polkadot blouse from New Yorker in a Dutch magazine. I didn't made a picture (stupid) so I'm not sure if I found it. It looked nice in the magazine and the price was listed as € 14,95. At the store I found a polkadot blouse but I didn't like it. I don't remember the price either. I also saw a cute party dress in the magazine for a nice price but I completely forgot how it looked. The dresses I did find weren't my style. Now about the leopard blazer; it was on sale, now only € 14,95. Too good to say no. I love the blue colors, it makes the blazer look more unique.


Did you ever bought so much you felt a little embarrassed? Or were you just happy (I can't blame you, because I was and am happy with my purchases)?
Author Unknown op 12:41 AM