Outfits of the week: Week 27

I went to Antwerp this week, had two interviews for my research paper and went to lunch with a friend. In general, I ate too much but sometimes that's so good. I just really like food. 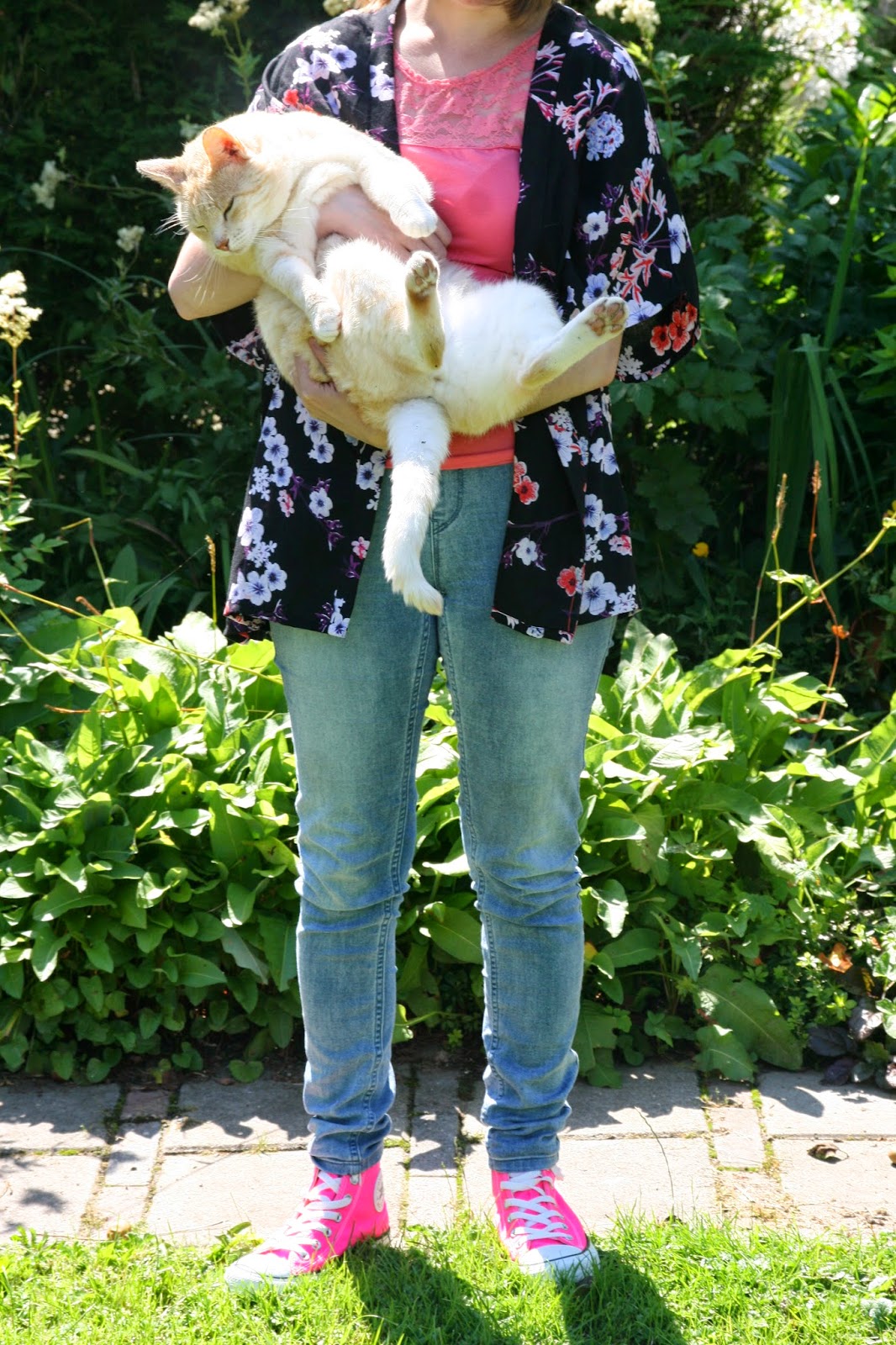 He looks like he wants to escape, but he wanted to be in the picture again since it had been a while (I think). 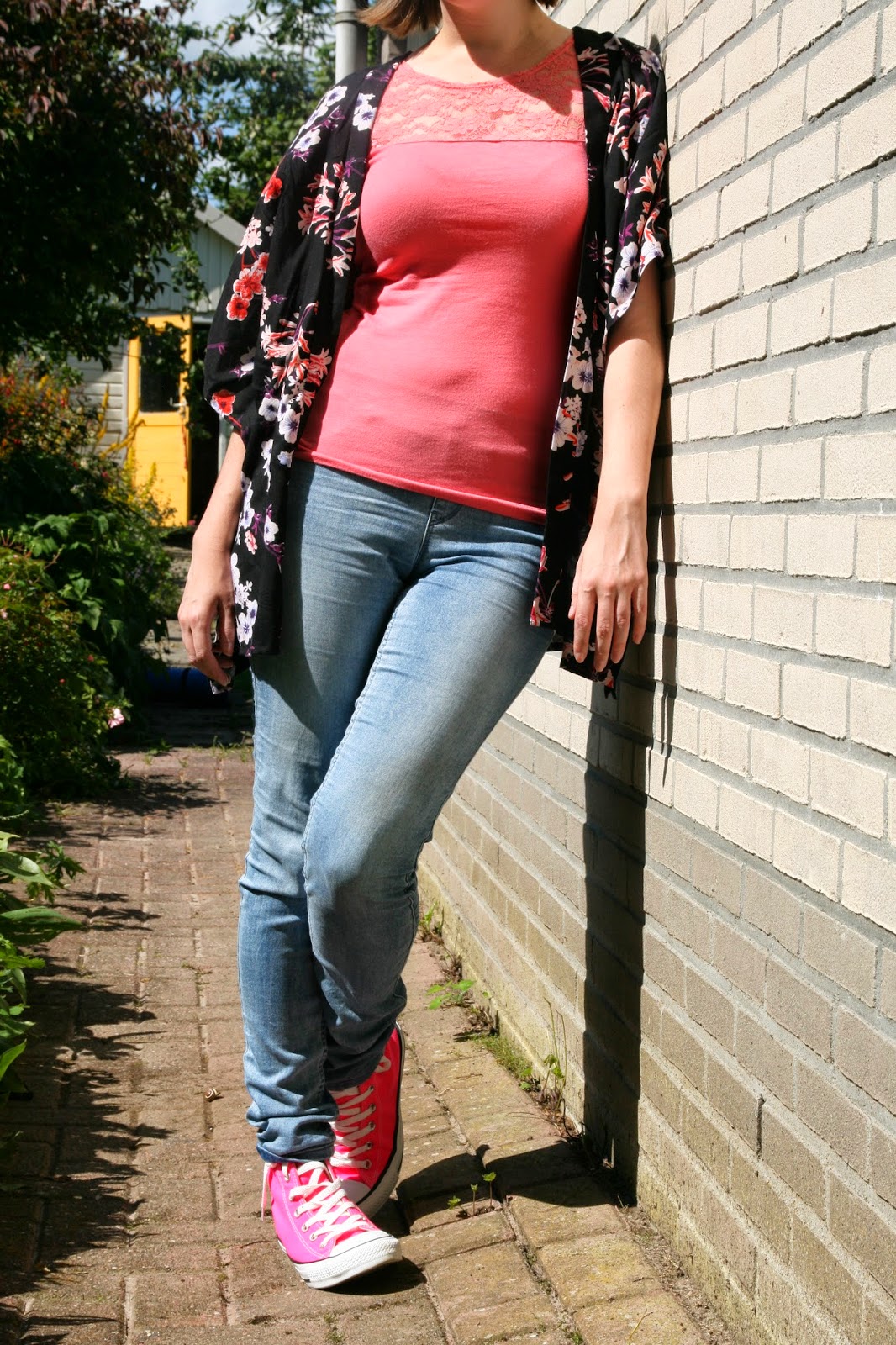 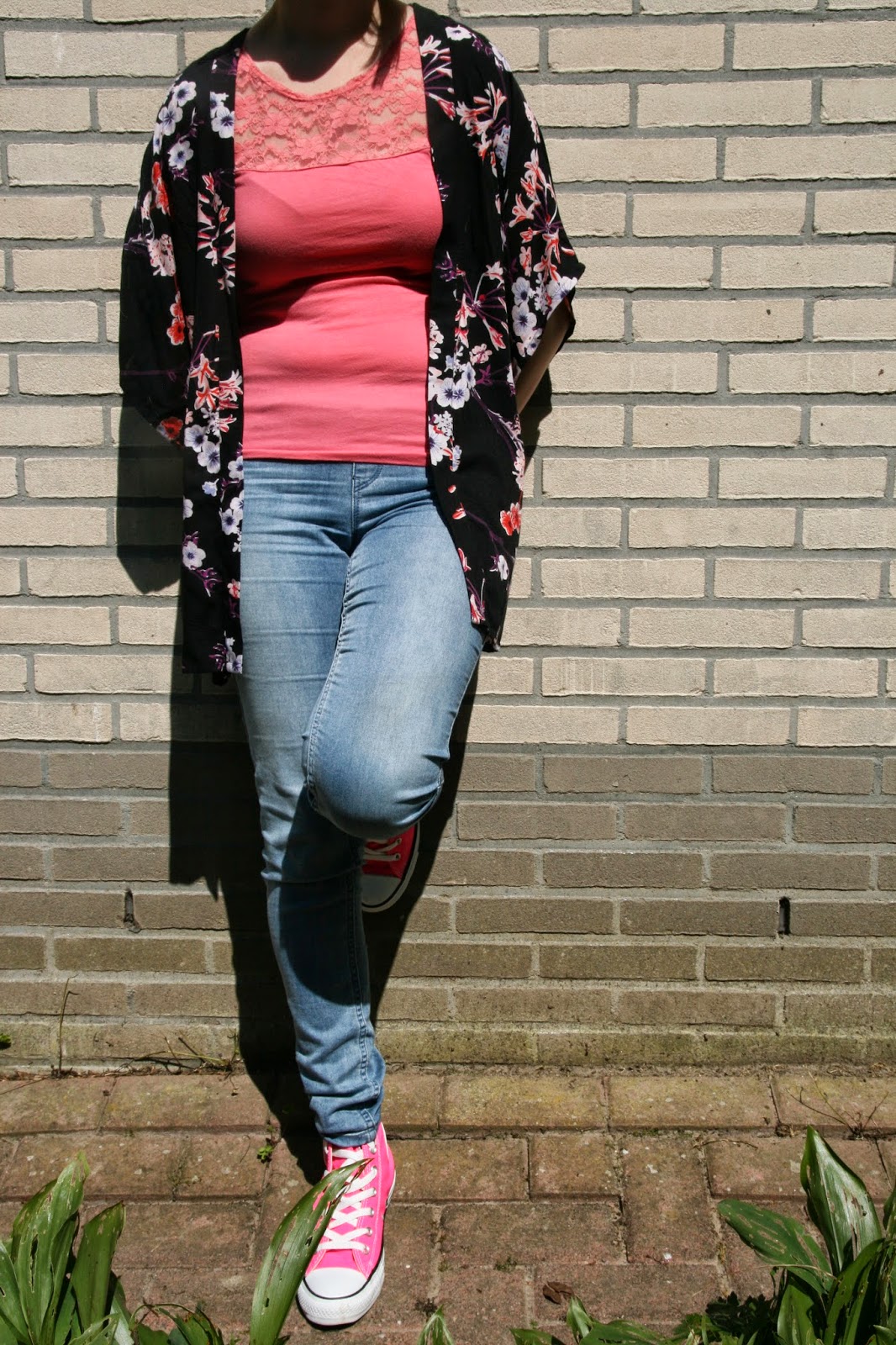 Sometimes I wake up or I'm laying in bed and I think, oh that can be a great outfit. This is one of those ideas. Though I'm not sold on the pink All Stars with this outfit. The rest of the clothes are all H & M. I bought the kimono and the tregging on the same day. The T-shirt is from the Conscious collection and is from two years ago. I also own it in red and purple and I have a similar one in white. 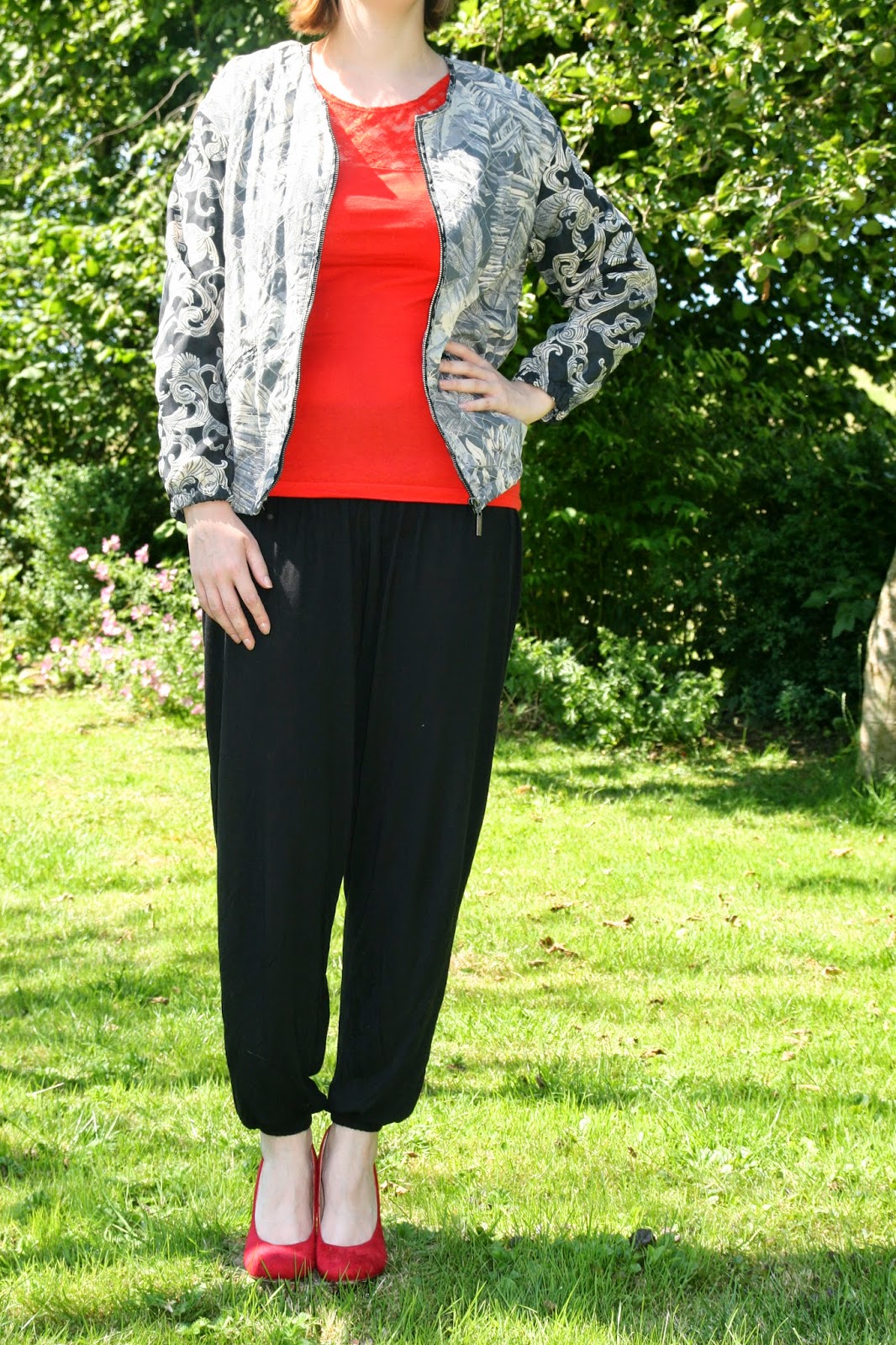 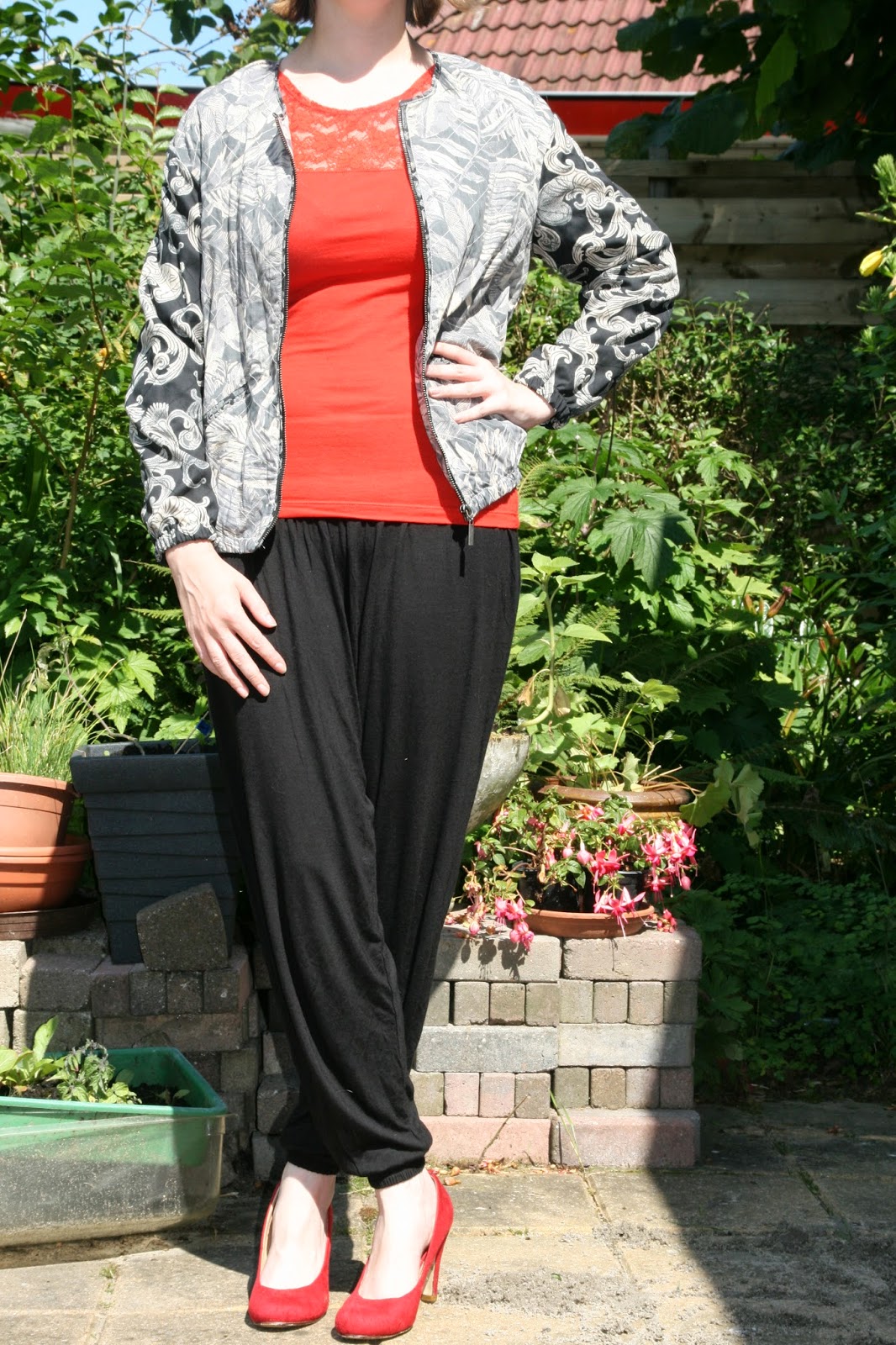 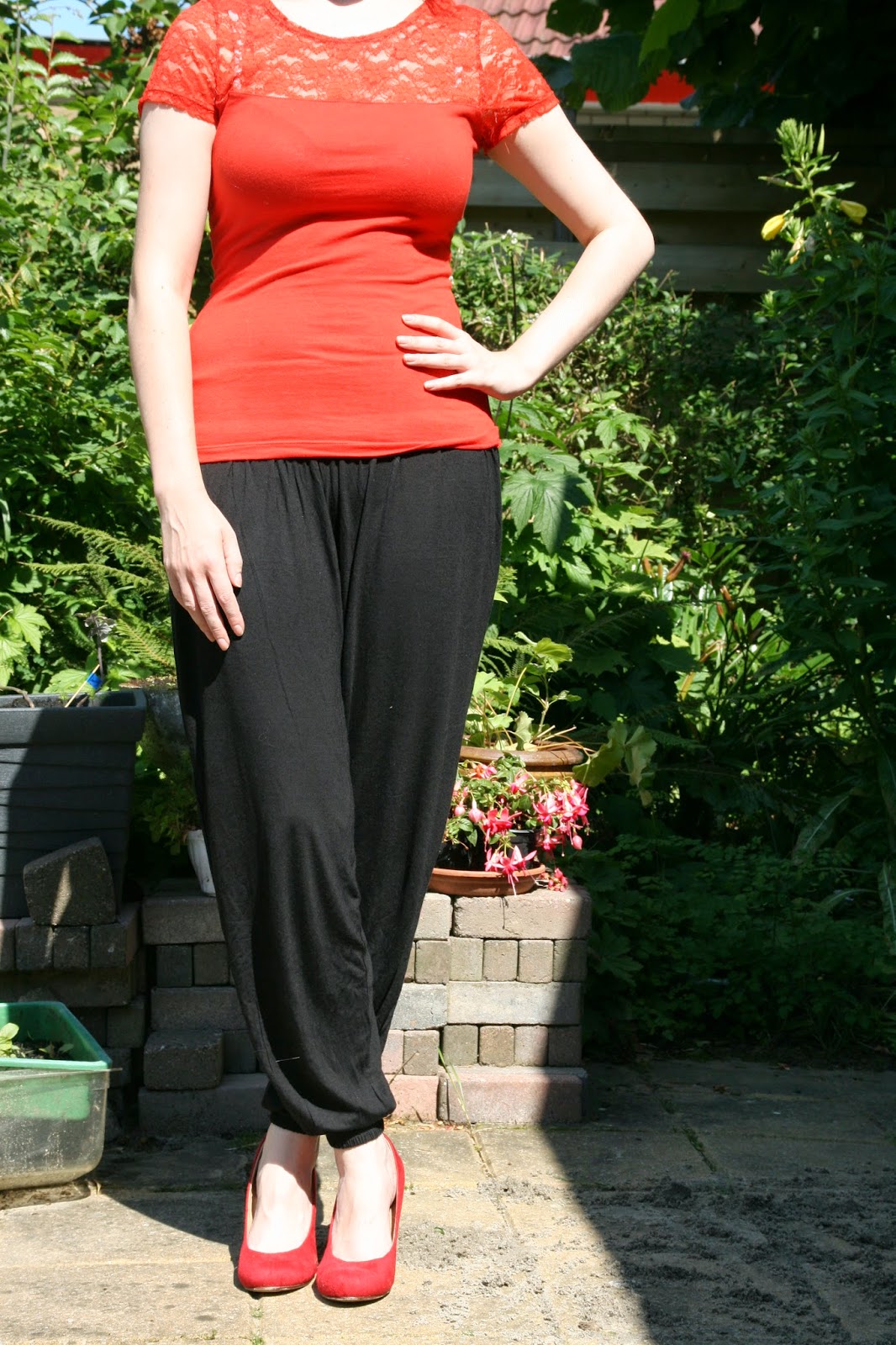 And here we have the red version of the T-shirt I wore the previous day. It's from H & M (duh) and from the Conscious collection from 2012. The harem pants and the bomberjacket are H & M as well. The red pumps are from Van Haren and are old. 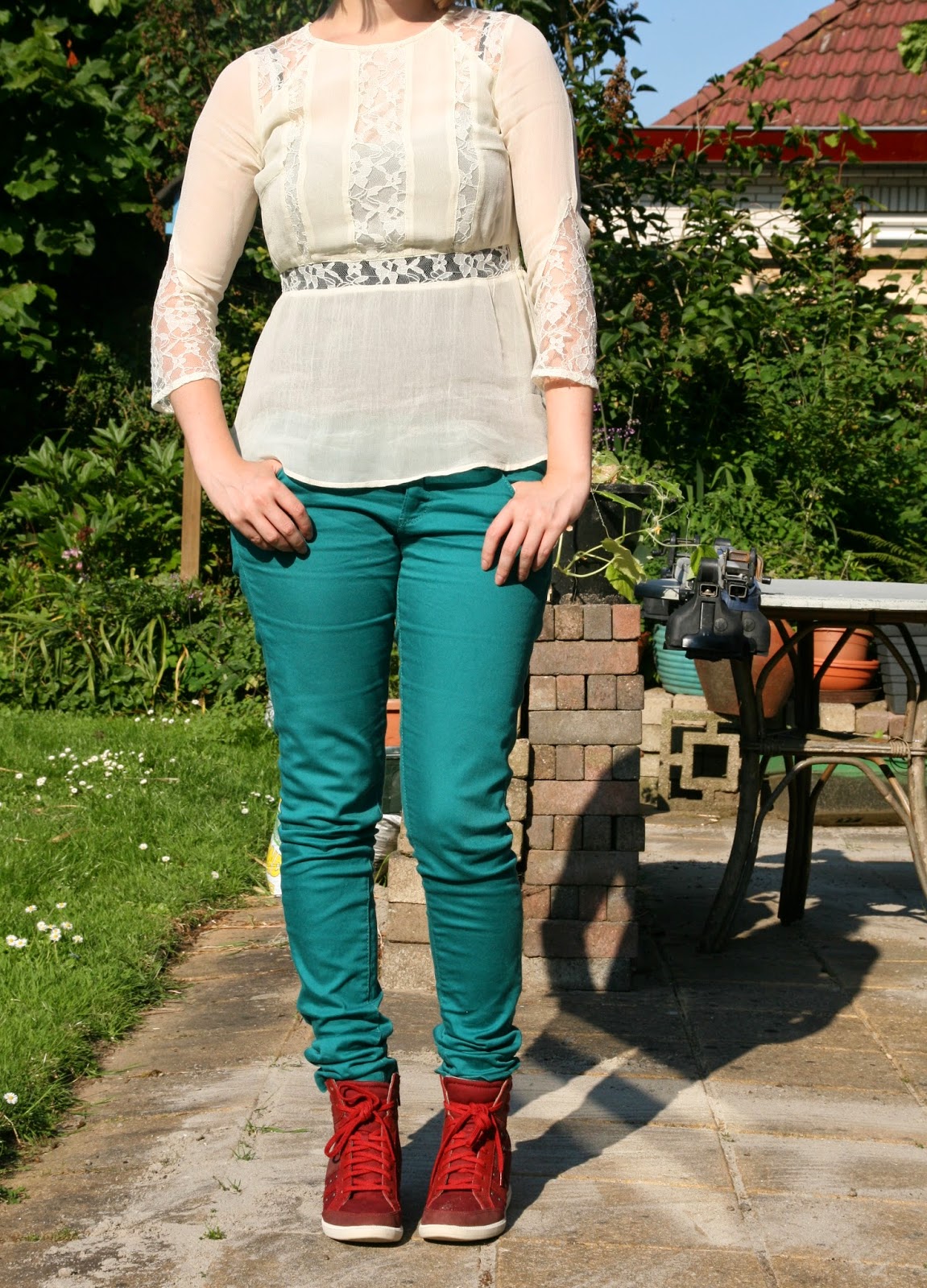 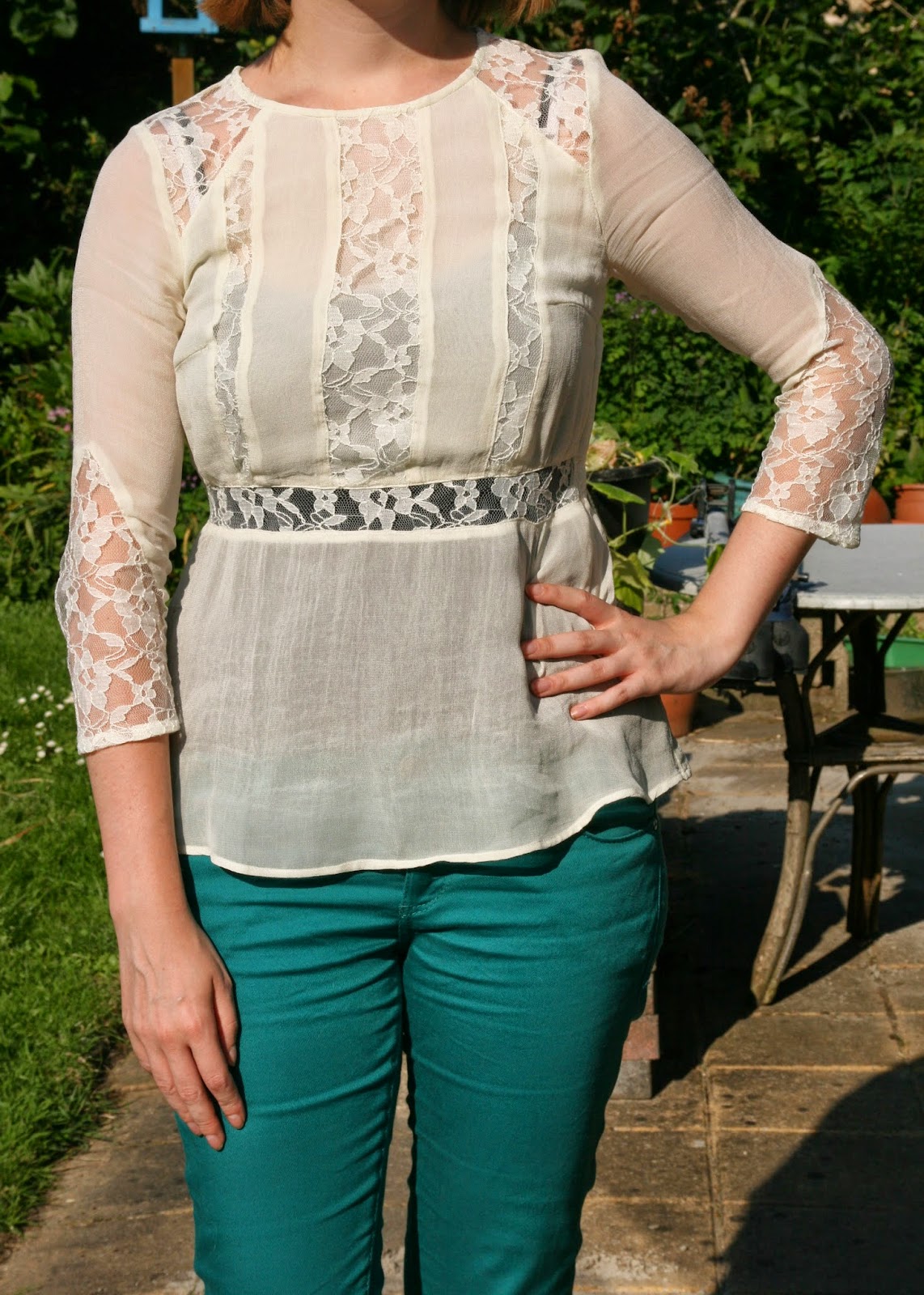 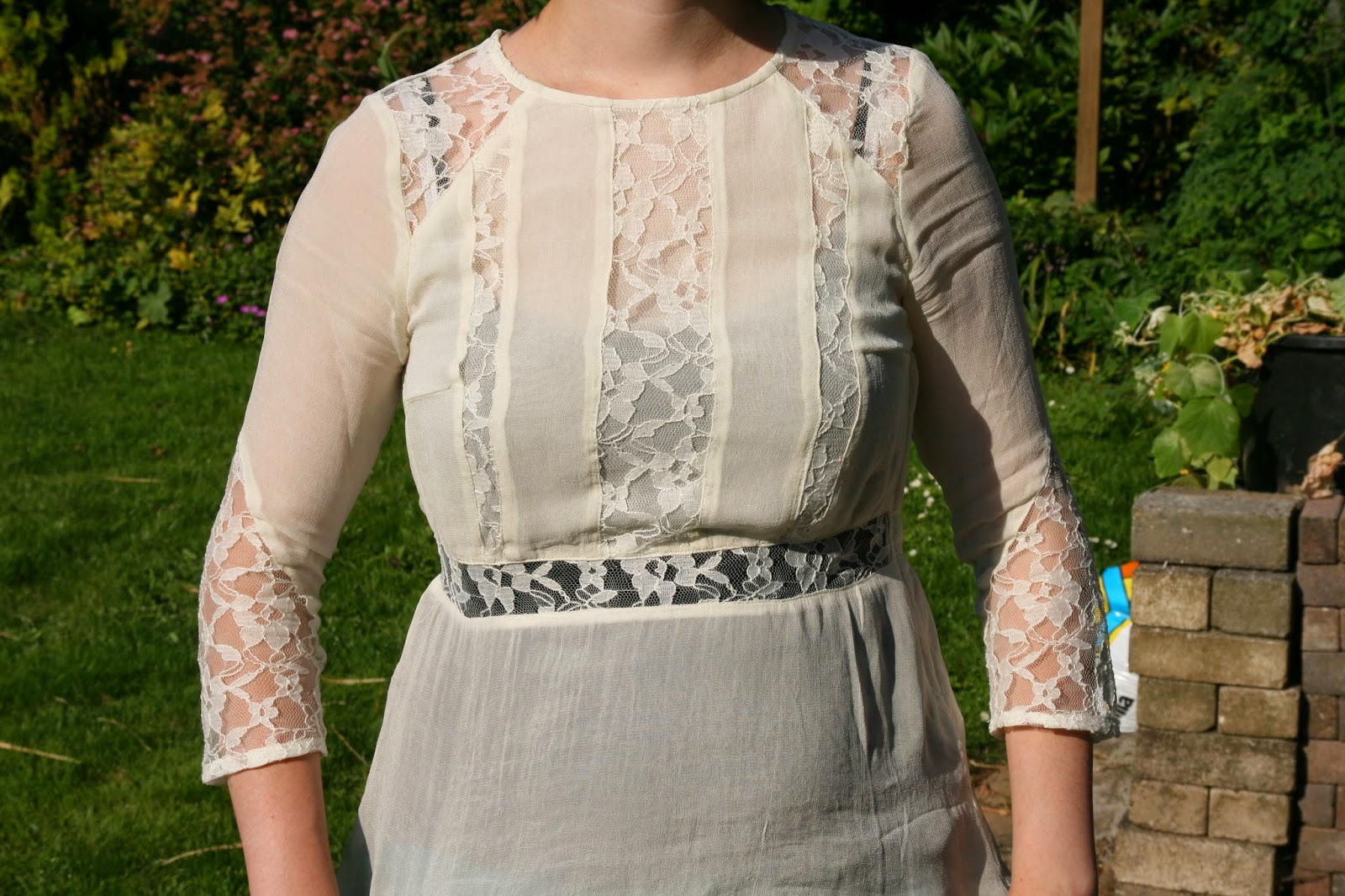 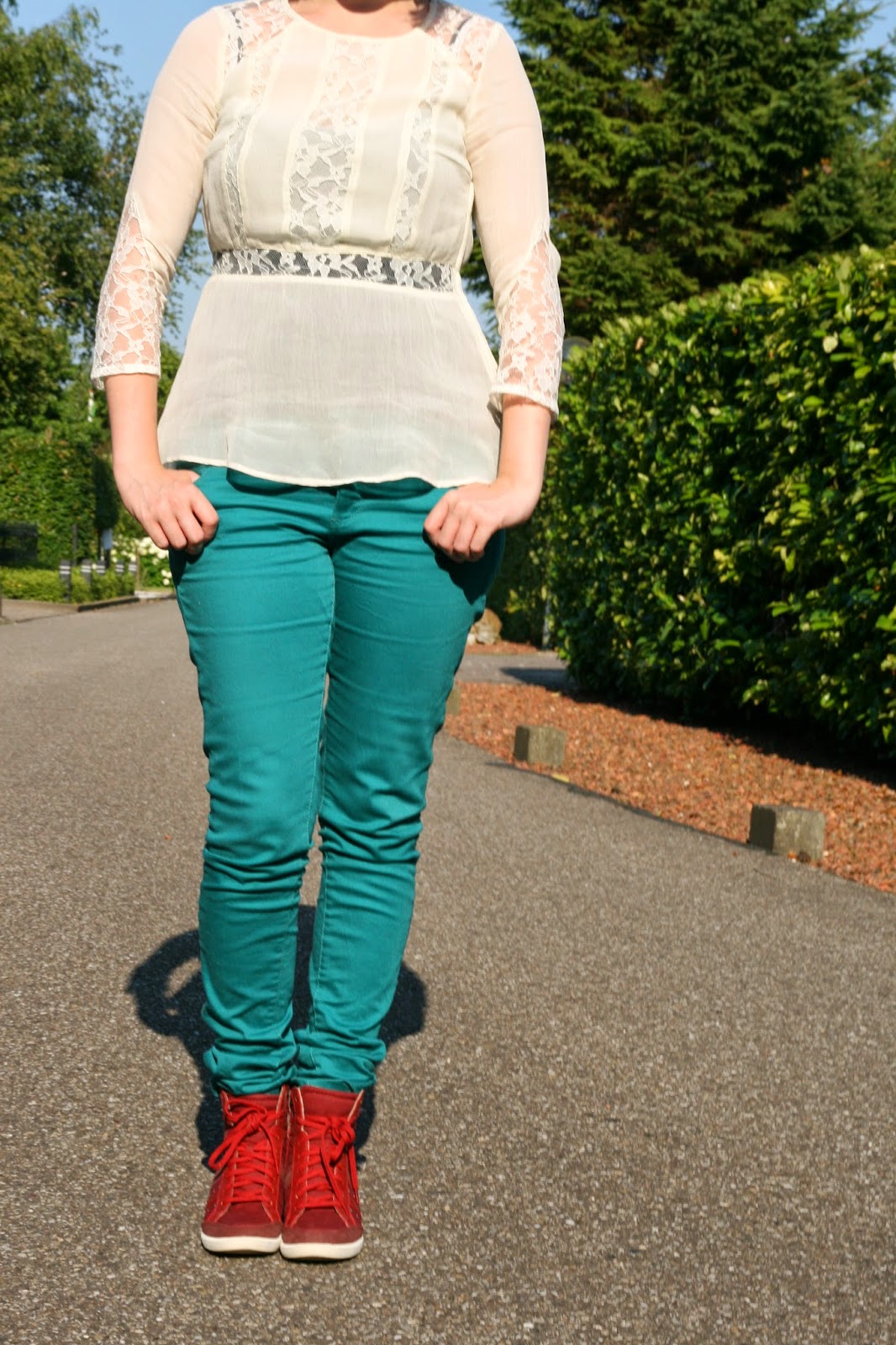 I went to lunch with a friend this day and the food was amazing. But I was so hungry we ordered something extra and then we were stuffed so we couldn't finish it. Such a shame because it looked delicious. And judging from what I ate it was indeed delicious. Anyhow, this is the first time I wore this white tunic from H & M which I bought almost a year ago! Funny thing is when I bought it, it was too cold and now it was kinda too hot. But hey at least I finally wore it! The green pants are old and from C & A. The shoes are brand new and are from Esprit. Green and red always remind me of Christmas but I don't think this outfit looks really like Christmas. Then again, it's never too early for some holiday spirit isn't it? 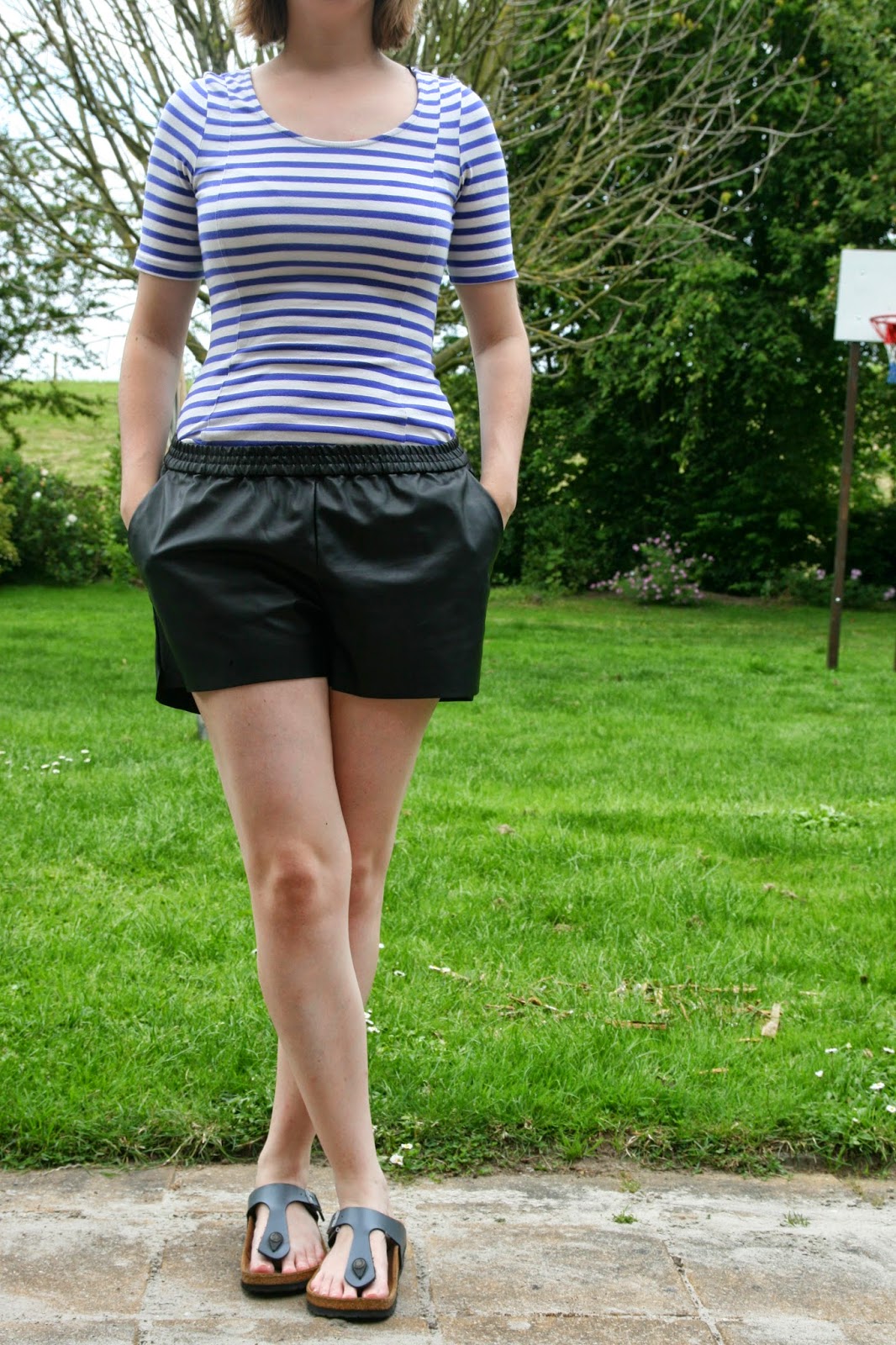 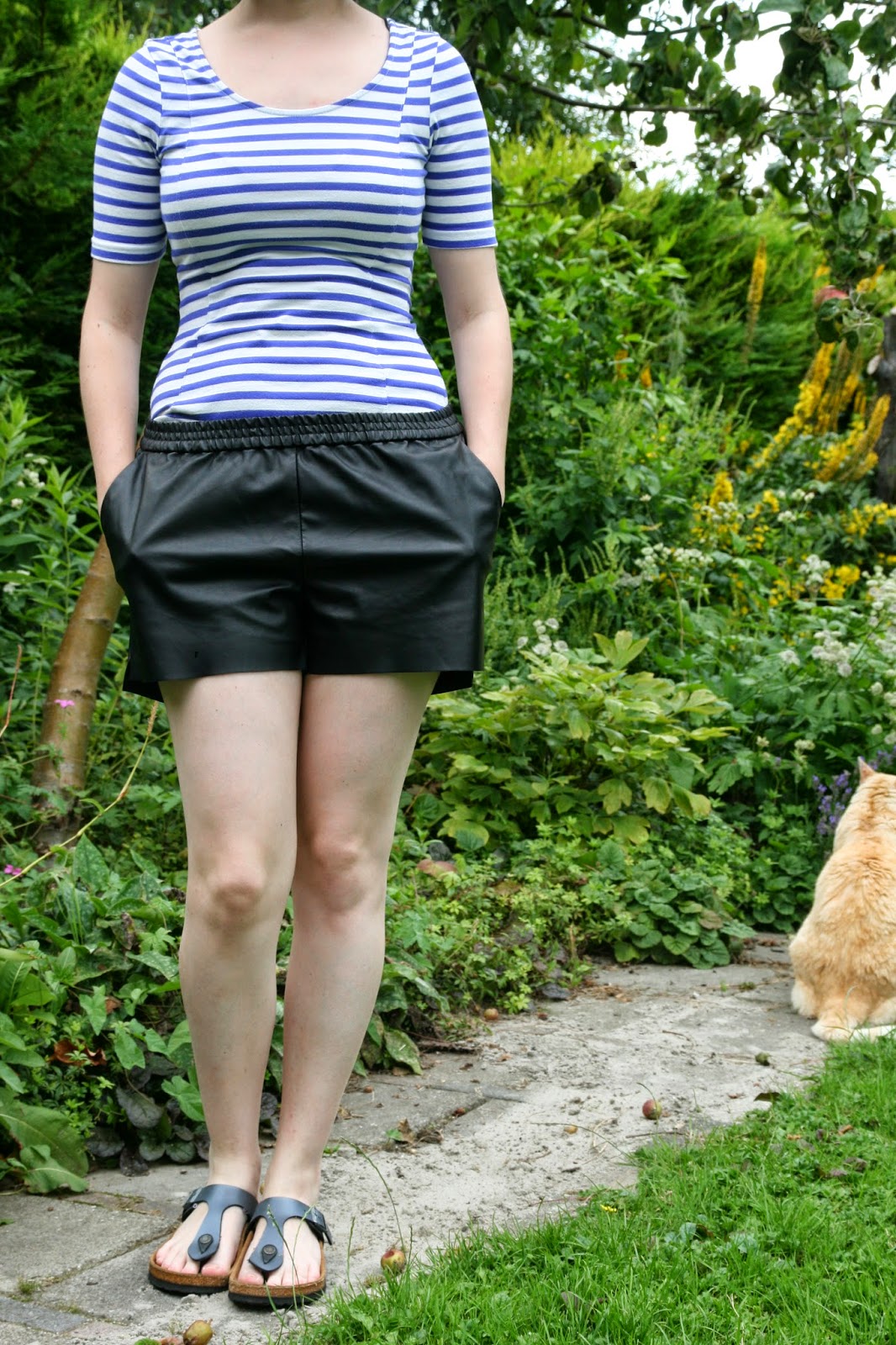 It's a shame the sun went away later in the day, because I wore a summer outfit but it looks like fall. I wore a striped T-shirt from H & M which I bought last year in May. The faux leather shorts are from H & M as well. The sandals are Birkenstock's and I bought them several years ago. 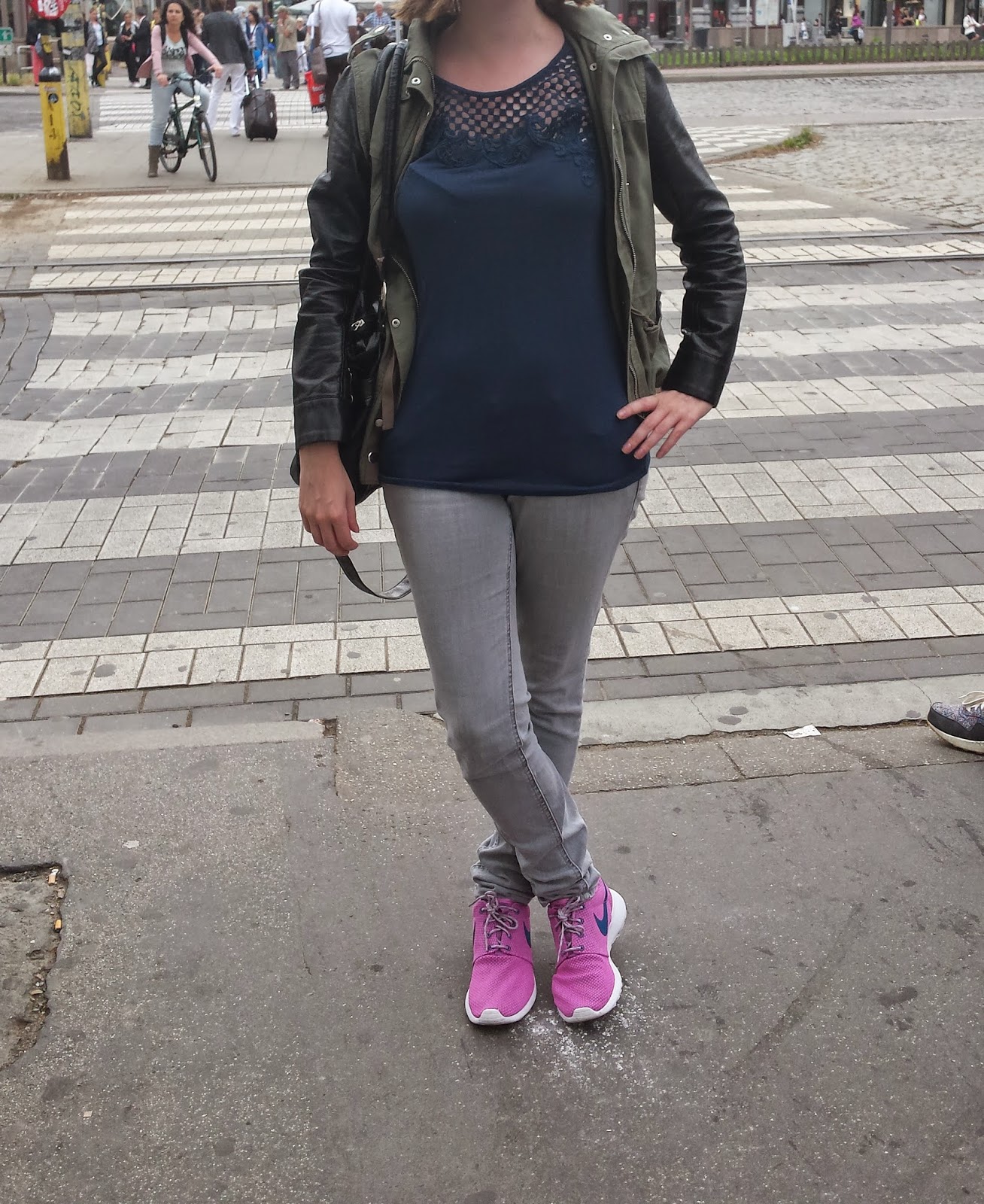 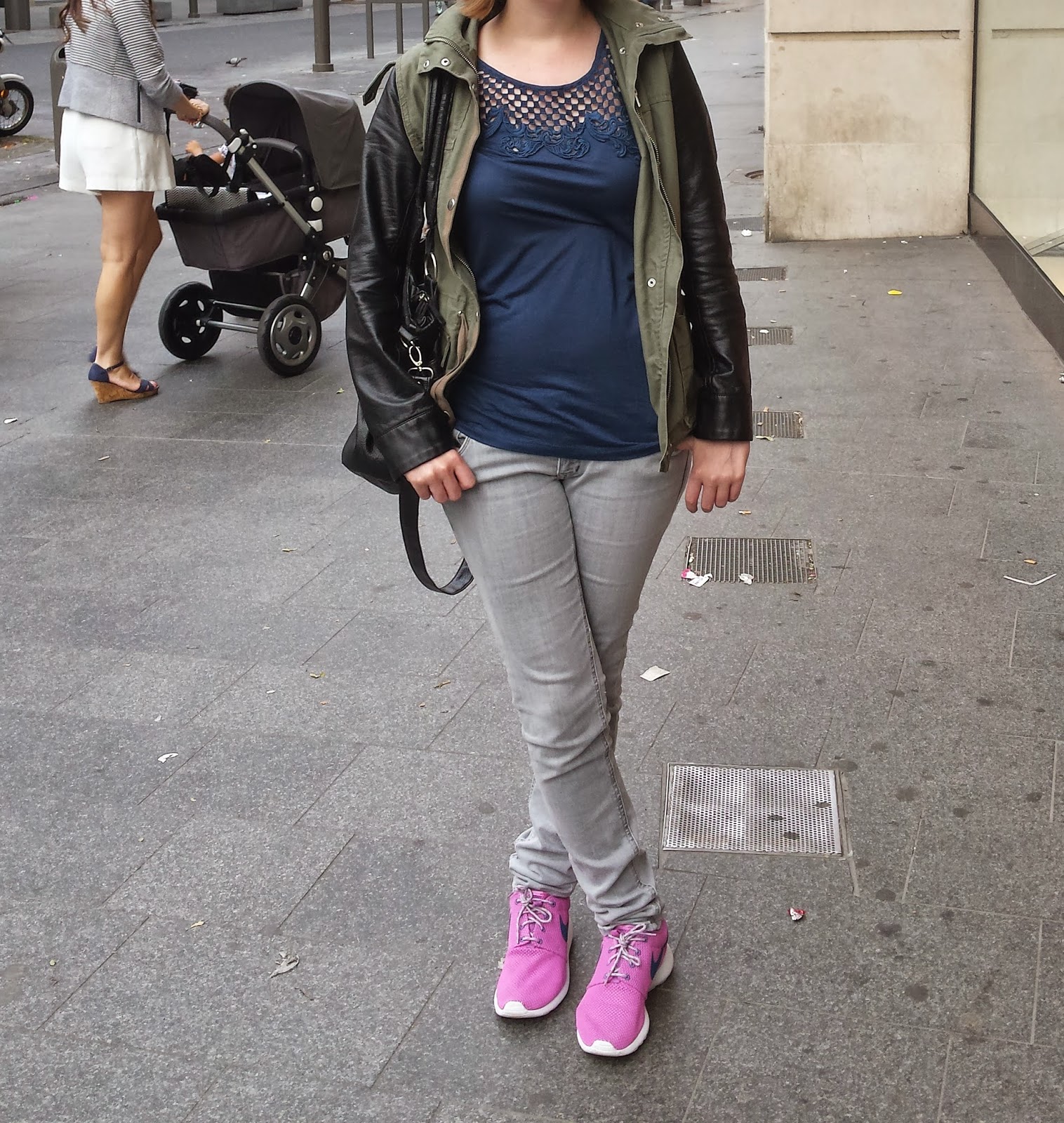 Wow, a whole different background. This was in Antwerp and I went shopping there with a friend. We stayed in an amazing hotel, watched the World Cup game (the Netherlands won from Costa Rica) and we bought a lot of clothes. I was so happy I wore my Roshe, because I usually end up with very sad feet because they hurt so much from all the walking. With these Nikes I did feel them, but not as bad as I usually do. Even with All Stars I usually have feet in agony, but not this time. Though I didn't mind sitting down either haha!  I also wore my green parka with faux leather sleeves from H & M. I still wear this coat a lot and I'm so glad I bought it! The blue T-shirt is from H & M, just like the jeans (old). 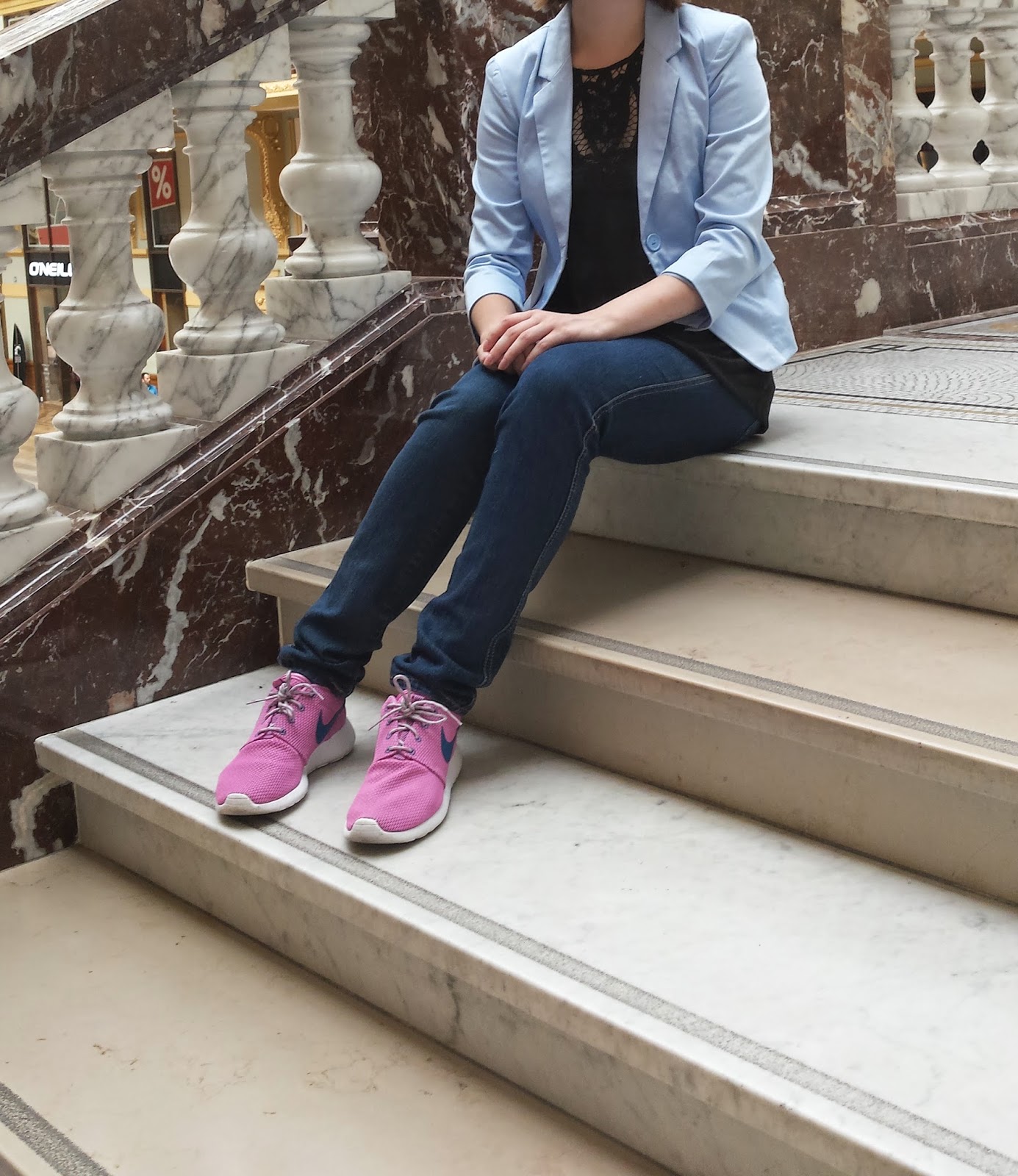 I wore my new blazer from New Yorker the following day. My friend actually recommended this blazer with the black top from H & M. Which I brought, but totes forgot to take something with me which I could wear over the top in case it was chilly. It was very hot in Antwerp in the morning and in the early afternoon. But when we came back in the Netherlands it was colder and the weather was shit. The jeans are from H & M and I bought them a year ago. Or maybe two? I can't remember.
Author Unknown op 11:45 PM